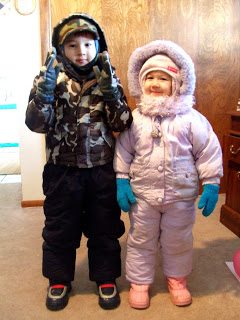 Well, we have had our first big snow of the year and the children are thrilled!
Here they are, all bundled up to play outside. One of Joshua’s new favorite words is “bulky”. They definitely had some bulky clothes on here!
(This morning he was talking about someone’s “big bulky eyes”. lol) 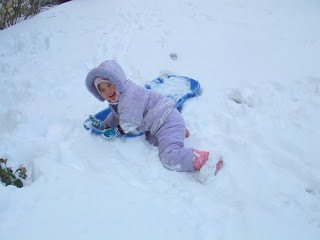 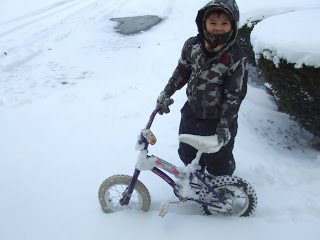 Joshua thought it would be fun to try to ride his bike in the snow, but it didn’t work out too well…. 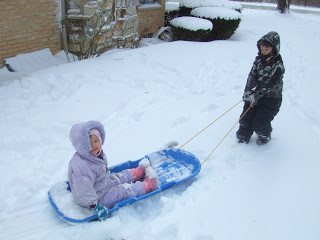 And now Joshua is old enough to take over my job of pulling the sled! Yay! It was good exercise for me, but now it is nice for him to spend some energy. 🙂 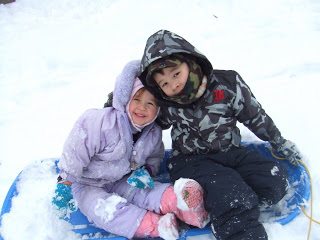 After I took these pictures, Israel woke up. After nursing and being changed, I showed him his siblings playing merrily outside the window, and he couldn’t wait to get out there too! So, I bundled him up and we headed out.
However, it seems they don’t really start enjoying playing in the snow until they are at least two, and sure enough, he didn’t like it nearly as much as he thought he would! Still, I gave him the chance to see what a sled ride was like, feel how the snow was “cold”, and watch his siblings for a few minutes. After that, he was perfectly happy to come back in the house with mommy and watch them from the window! 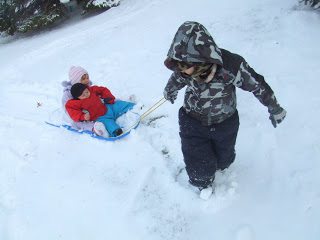 Here is Israel’s first experience with snow! (He didn’t really notice the snow too much last year. 🙂 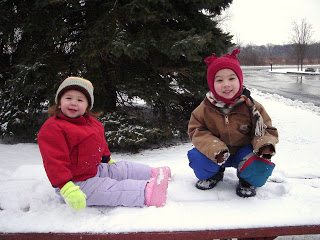 This is by far the “funnest” year for the kids to play in the snow so far! This picture is from last year, when things were improving, but Dominique was still too little to stand the cold for long, and I had to be outside if she was, *at all times!*, which was difficult with a newborn! And once Dominique was done, Joshua would cry that he wanted to stay out, but not all alone!

The year before that was worse, when Dominique was one year old, and hated to be out, just as much as Israel does right now! Then Joshua really had a hard time. 🙂

So many things change as the children grow! I truly have enjoyed each stage so very much, but it is nice in many regards that these two are getting a bit older, and are such good playmates for each other. They are best friends!
Thank you, Lord!