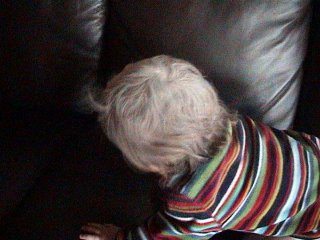 The other night when Fabio got home from work, we were talking in the kitchen, when suddenly the kids took off down the hall. I figured they were headed to the study to get some toys, but a few minutes later we hear them laughing hysterically! I told Fabio, “This can’t be good news!” So I went looking for them, and found them in the hall bathroom. Apparently, Dominique had pulled the baby powder out of the cabinet and shook it… then Joshua jumped on the bandwagon and started DOUSING Dominique with powder!!! They both thought it was hilarious… Dominique looked like she was wearing a powdered wig, and the bathroom was like one big cloud of powder. I took a second to take it all in, trying to decide what to do, and stifling laughter at the same time. Finally I said in as serious a voice as I could manage, “Joshua, I’m going to take a few pictures, and then you’re going to get a spanking.” hehe. 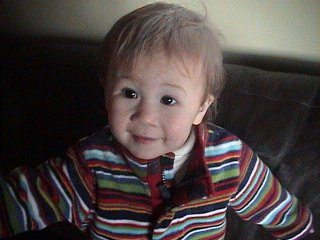 These pictures don’t *quite* capture it, because I didnt take them in the bathroom, and I had already wiped off her face, but you get the picture. 🙂

I had had that powder since Joshua was a baby, and pretty much never used it, so it was full. And now it is empty. So, Im sure we wont have this particular thing happen again. :-)~