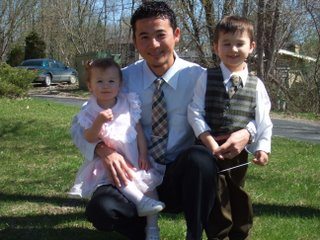 Wedding in Wisconsin and Easter Weekend

Well, this post has been SEVERAL days in the making! It was one thing after another, but anyway, I finally got it done. I hope. Except for the video clips. For some reason, I cannot get them on here properly, so I will still try to put them up on another post.

Wow, life can get busy! Easter weekend was one example. We left early on Saturday morning for a wedding in Wisconsin. The wedding was for a close friend of ours, whose father founded the Peruvian church we went to, and Fabio was saved in, in Japan. He is now pastoring a church in Milwaukee. He performed the wedding in Spanish, and there was translation to English. I included a video clip, especially for those who know the Maceda family and would like to see it. Gizeth is the second of three daughters, and she married Andrew Geraci. It was a beautiful wedding and we were happy we were able to attend. 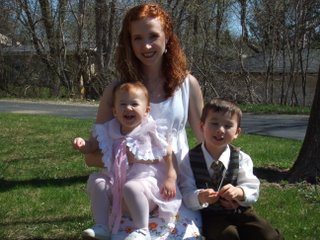 First, some pictures we took of us before the ceremony. They turned out good except that Joshua seemed to have trouble keeping his eyes open! I guess it was too bright for him! I also wished there had been someone around to take one of the four of us together, but oh well. 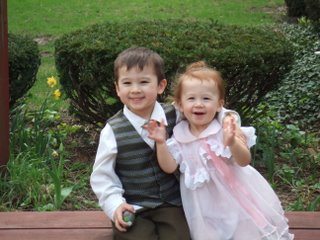 Our sweet kiddos. Joshua is going on four now, and Dominique is nearly 18 months. 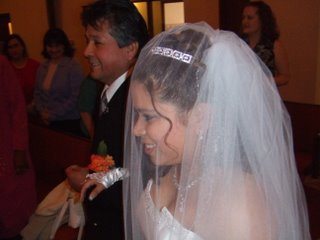 Pastor Maceda walking his lovely daughter Gizeth down the aisle. 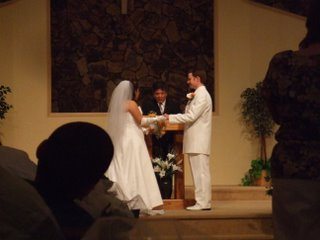 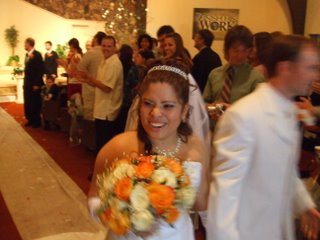 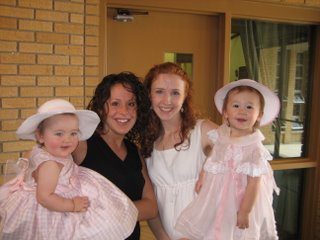 We left the wedding and went straight to my brother Scott’s house for a party for Aaron. I deeply regret that I didnt take any pictures there! What was I thinking??? I guess I was too tired from the day and there was too much going on.
Then, I also forgot my camera for church Sunday morning, but luckily my friend Michelle brought hers, and got this darling picture of our sweet girlies in their hats. This is actually the only pic I got of Dominique in her hat! Oh, and Michelle and I are both pregnant too. 🙂 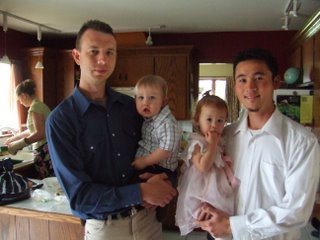 Daddies and Babies!
My oldest brother Scott and his son Gabriel, and Fabio with sleepy Dominique.
This was at our place. The family came over after church for Easter dinner and we had a great time. 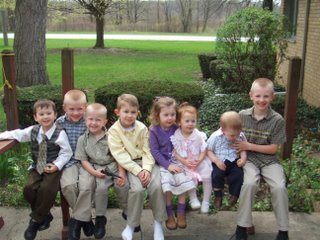 Here are the grandkids minus Jessica! She had gone with Aaron on an errand and I never did get one with her in it once she got back! I also regret that I didnt get on of Aaron’s family once they got back…. and they were the star family of the weekend! I kept thinking I would do it once they got back and apparently I never got around to it. Ugh. 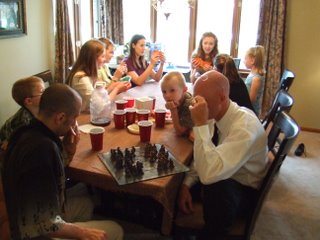 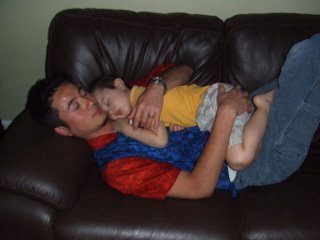 It was a fun, but long weekend for everybody! Joshua and Fabio finally pooped out on the couch about 5pm on Sunday. 🙂 I had to wake Joshua up around 6pm though, to make sure he would sleep that night! He did. With no problem.

Next I will be posting pics of this past weekend, which was also eventful. We made a trip down to see my Grandma for her 80th birthday! It was a good time.

Unfortunately, I got the flu upon returning, so I have been out of commission for a couple days, but I am glad to be feeling better now. I actually am VERY relieved to realize that it was the flu. At first I thought I just had a much more severe case of morning sickness with this pregnancy…. which made me think it might last another couple months! I was not happy with that thought! So, since it was the flu, I was able to get over it and now I am back to the much more manageable morning sickness. 🙂

Aaron will be leaving again tonight for California. I am glad that he will be back one last time in May, so we still dont have to face saying goodbye for good just yet.