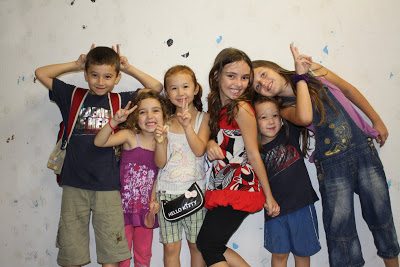 We are in Santos!

Last night, after praying with Michael and Paticia, we rushed out the door, leaving them with Claudio and Paula, to catch our bus to Santos. When we went to Camboriú, we only took supplies for one month, and the rest of our things we left in Santos. Now that we are switching gears from short term to long term, we needed to go back to Santos and get the rest of our things.

We decided to take Vamilson with us. As willing as he is to work in the church, the routine was getting a little humdrum to him, as he has always been a “free spirit” — so we thought a little change of pace would do him good. There are also temptations in Camboriú that are a constant struggle that would do him good to have a break from. Finally, since Fabio is one of the main ones discipling him throughout each day, we didn’t want to leave him just yet at this still vunerable time in his life in Christ. So, we brought him with us.

We arrived safely this morning after the ten hour bus ride. The kids were sad to leave Camboriú, but now they are happy to be in Santos. That is how they are – 100% there, wherever we happen to be! Here is a picture of them in Camboriú, with the other children that live at the church:

And… today is our ninth wedding anniversary! Happy NINE years, baby!! Because of the trip and because of the children and because of our guest, we weren’t able to celebrate with a traditional night out with “just us”. But, don’t worry about the state of the union – it has never been stronger. We… stand fast in one spirit, with one mind striving together for the faith of the gospel (Phil 1:27) Being on this adventure together, following the Lord’s leading and serving him as a couple and a family, had brought us closer than ever. I am so thankful for my husband, more and more with each year that passes. I appreciate the husband he is, the father he is, the man of God he is and the willingness he has to take risks for the Kingdom.

Before Fabio became a Christian, I received a word of prophecy (long before we were married), that God wanted to make out of Fabio a mighty warrior in His Kingdom, but that I was standing in the way (while trying to be helpful!). I am so glad that I got out of God’s way, and I am blessed beyond measure as I see God faithfully fulfilling that good word He spoke over Fabio all those years ago: a mighty warrior in the Kingdom of God.

I love you, Fabio, more than words can express!