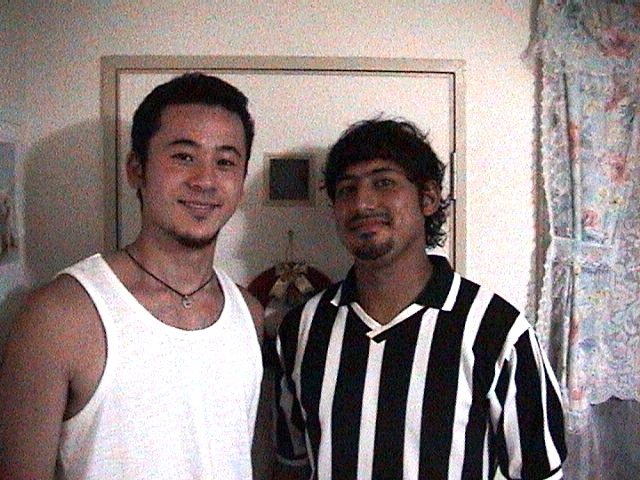 This World is not My Home – PART THREE 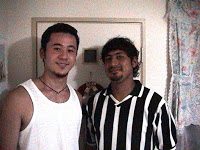 Shortly after that, Fabio was offered a job back in the town we used to live in. This would require a move, as the base was too far away to commute. We had a Peruvian friend who was about to travel to Peru to join his wife and daughter for vacation, and he offered us his tiny apartment. He was also renting to an older lady, but he said she worked long hours and only slept there. So we agreed. Problem was, he never went to Peru, and the other lady lost her job right after our move in, so there were all five of us in a total of about 375 square feet. If our living conditions at the YWAM base had been limited, this was downright claustrophobic! And indeed, there were times I felt I certainly might not survive. It was not only a matter of space (or lack thereof), but there were a lot of other complicated dynamics involved in this situation. Just to mention one, our Peruvian friend was a “gomi” man (garbage collector), and as I mentioned you can find some pretty neat “gomi” in Japan, which our friend did regularly. He could not resist collecting it all! Since his apartment was only about big enough for a dog to live comfortably, he boxed all of his gomi treasures up, and stacked the boxes floor to ceiling, lining all the walls of what was now our bedroom (minus the “bed” – there was barely room for the three of us to sleep like sardines on the tiny bit of floor space that was left). This left no space for our suitcases, which had to then stay in the trunk of his car. For three months. So, every time I needed a change of clothes or anything else, I had to go down two flights of stairs with a baby in tow, rummage around in our suitcases in his trunk – which was not easy with a baby in my arms – to find what I needed. Frustrations abounded.

(Joshua with our dear friend Eiko-san. In the back you can see the boxes stacked up full of “gomi” treasures.) 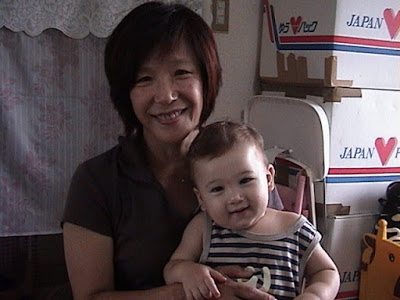 It was during this time that I found an Elisabeth Elliot quote that brought comfort to my despairing soul: “All those things which go against my will and my desires, are things which God desires to use to shape me into His image.” This deep truth gave me hope during those months when it seemed that my entire life and every detail of it was going against my will and my desires!
In September of 2003, nine long months after our initial move and Fabio’s deportation, we were finally able to move for real. It had been a time of the Lord stripping everything away from us, and while I don’t desire to volunteer for a replay, I am SO thankful for everything He did and taught us during that time. We arrived with only the clothes on our backs and our faithful luggage, but at least we had no debt. Fabio’s job those last three months had paid our rent in Japan, our tickets to America, and bought us a Ford Econoline van for $1000. Now we were broke again, but at least Fabio was able to start working in construction with my dad and brothers right away.
(This picture was of our last days in Japan.) 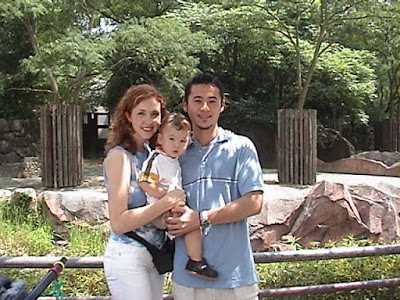 It was an amazing thing that after only one month of staying with my parents, we were able to get our own apartment. We couldn’t have been more thrilled! And thanks to my family mostly, as well as some other friends, we were supplied with all the basic furniture we needed to set up housekeeping, without spending a dime! Good thing, since we were rather short on dimes still.
As we were unpacking, I was so excited to open those few meager boxes of our most precious things that we had shipped from Japan months before. They had been unopened at my mom’s house, just waiting for us to have a place to unpack them. The day had come! I ripped the tape off and began to remove the newspaper and bubble wrap I had placed so carefully around everything…. only to find that the vast majority of it was broken! Oh, this was a hard blow! How could it be? I had packed so carefully!
I eventually came to understand that this too was a lesson. Now I was finally able to see it in myself: materialism. I had been so incredulous when the Lord had first spoken it. Now I was beginning to understand! You don’t have to be wealthy or extravagant or into the latest fashions to be materialistic. The tightest penny-pincher of them all could be just as attached to “stuff”… or more so! And I was attached to my stuff. Now I could agree with the Lord’s synopsis and ask Him to work in my heart to make me more like Him. And I could be thankful that He had already begun.
I remember one day shortly after we were settled, looking around our “new” apartment, and all of our “new” belongings, and being amazed at how nice it all was and how God had provided for us so, so well. And there was that voice again, “Didn’t I say I could give it all to you again?”
And then just a year and a half later, we were offered the parsonage of our church – an enormous, beautiful home that was also partially furnished. It was amazing. And there was one day, shortly after that move, when I was looking around in awe that God had granted us the privilege of living in this unbelievable home that God said it one more time, “Didn’t I say I could give it all to you again?”
How could I ever doubt it again? 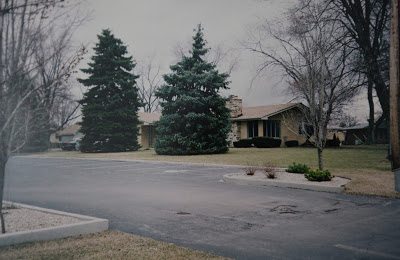 (The beautiful church house we were privileged to call home.)
TO BE CONTINUED….
CLICK HERE TO GO ON TO PART FOUR.