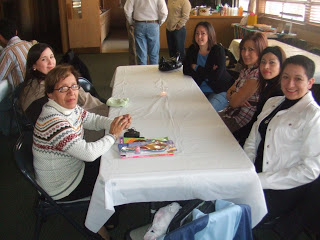 The Week In Review

Last Sunday, we had a going-away party for Maria, one of the ladies in our group who moved back to Mexico on Wednesday. (She is in the front on the right, in the white jacket.) It was a bittersweet time, as we will miss her, and yet we see the hand of the Lord in her life, and know that He will guide her way in Mexico as well. We showed a short video we had put together for her to remember her times with us, if you would like to check it out: http://www.youtube.com/watch?v=X-HNAtyxEKw The text that you see intermitently is the 23rd psalm. 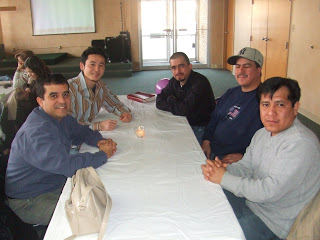 The guys at the party. 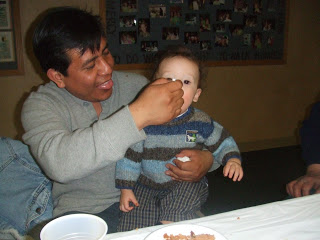 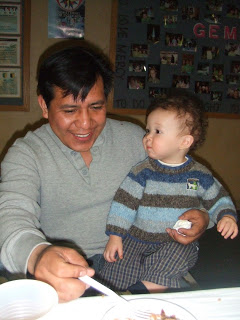 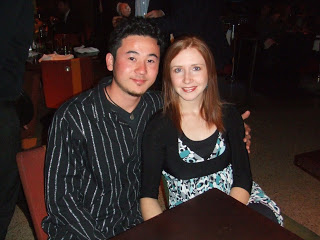 Then on Friday night, Fabio and I had a date night and it was wonderful! Fabio found a place downtown called Sushi Samba, which is, of all things, a combination of Japanese, Brazilian and Peruvian cuisine!! Imagine that! It was a perfect night for a walk in the city, too, and made me think that spring might come one day after all! 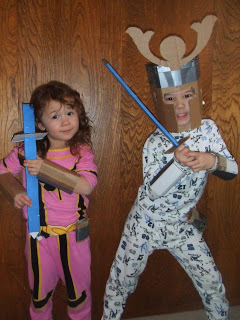 This was this morning.
Fabio is SO creative with things like this! When I want to do a project with the kids, I get out a project book or look something up online… but not Fabio. He has all he needs right between his ears. 😉 This is the armor he designed for the kids this morning, with nothing but a cardboard Aldi box and some tape. They LOVED it! (Except that Dominique didn’t want a helmet because she found it entirely too uncomfortable. 🙂

(Notice their sheaths on their “belts” as well. ) 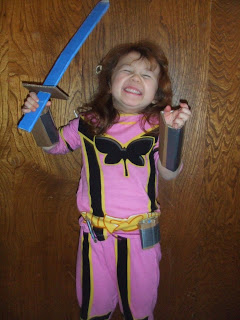 This was Dominique’s attempt at a “mean face”. Convinced? 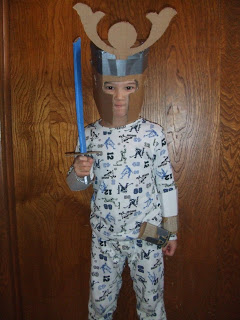 I think Joshua was a tad more convincing…. 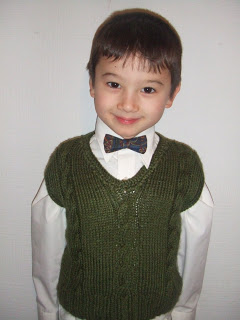 … although he doesnt look much like a rough-and-tough soldier here! Here he is in the vest that Fabio’s mom knitted for him. She nearly threw it away last year because she didnt think it turned out right, but I think she did a wonderful job on it! Joshua just LOVES to wear this bow tie, and would wear it every Sunday if he could. He likes to tell people that “not very many people wear this kind of tie any more, because it’s old fashioned.” I’m glad he doesnt mind marching to the beat of a different drum! 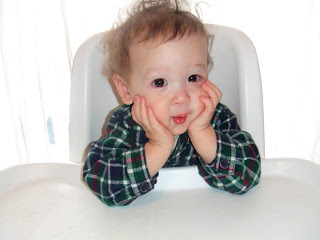 And lastly, a picture of our littlest angel, “patiently” waiting for his food. Believe me, that doesnt happen very often, as he is *quite* the eater these days! Made for a cute pic, though!

And I am thrilled to report that I feel half-way ALIVE again this week!!!! Hip-Hip-Hooray!!!!! I think we all finally recovered from that nasty sickness, AND I am also feeling slightly more energetic now that I have passed the 12 week mark of pregnancy. It feels wonderful to have a little bit of desire to actually do something. 🙂

Another bit of good news is that Fabio went back to work this week after three months of being laid off. It looks like they will be relatively busy from now on, so we are thankful for that. 🙂 We do miss him dreadfully, though… 🙁 I was extremely grateful to have him home during the time that I was feeling blah, as he was a fabiolous help with the children and makes some pretty darn good breakfasts when his wife can barely function without food in the morning!

So, the Lord is good – in sickness and health, in times of plenty, and leaner times as well. We have so much to be thankful for!