When we first moved into our own home last July, there were many things we needed – basic household goods, appliances and furniture. Things like a refrigerator. We couldn’t possibly go out and buy it all at once. The church loaned us this refrigerator, a spare used only for events, until further notice.
While it was a classy model, it lacked a freezer and also sounded like an old Ford truck driving through the kitchen when it was running, which was most of the time. And in spite of the fact that it had no freezer, it did fill up with ice rather quickly. I didn’t know what to do about this “problem”, but I learned! It wasn’t ours to keep anyway, and we were thankful to have it anyway, until something else turned up.

A few weeks later, something else turned up! We were thrilled! But we put it outside the back door to test it before returning the church’s. The freezer worked great, but the refrigerator part didn’t. 🙁  But since the kitchen’s model did not have a freezer, we left them both plugged in so we could have both a freezer AND a fridge. 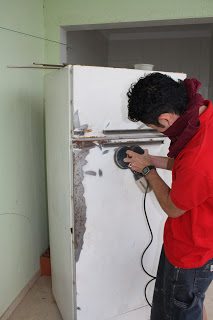 Then, Fabio called a repair man to see if it could be fixed. He refilled it with gas, and BAM! It got nice and COLD! We were thrilled again! Fabio then unplugged it and began to refinish it. It took him nearly two weeks of sanding and painting, but it turned out FABULOUSLY! We put it in the kitchen, put the church’s refrigerator in the carport, and Fabio began refinishing it too before returning it to the church. 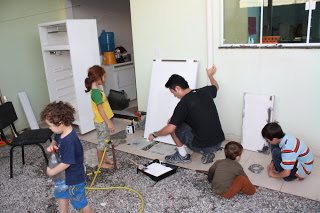 The following week, we noticed that the fridge was not really COLD anymore. Things started to spoil… 🙁 Fabio called the repair man again, who told us the first one had put the wrong kind of gas in. We paid again for him to put the “right” kind in, and it started working again! For almost two whole weeks!!! Then… it stopped being cold again. Still, the freezer worked, just not the fridge. It also filled up rapidly with ice, but now I knew how to defrost them! A new skill learned!! 🙂 So, we plugged the church’s fridge back in, in the carport, which we hadn’t returned yet, and began using them both again. It wasn’t the handiest to run back and forth from the carport for everything, but that was what we did.

Then we went to Santos for the holidays. When we got home, the kitchen model had gone kaplooey for good. No fridge, no freezer. Nothing. Dead as a doornail. We dragged it out to the carport, and brought the still unreturned church’s model into the kitchen again. At least it was nicely refinished now!

However, we quickly discovered that now in the peak of summer, the little fridge was not able to combat the high outdoor temperatures. That is, it could not stay cold enough. 🙁 So… food started to go bad again. This put a serious cramp in my style, as I had to run out to the store every day to buy just what I could cook and we could eat THAT day, to avoid spoilage. I LOVE buying and cooking in bulk, and freezing extras for another day, so this meant spending a lot more time in the kitchen.

Then…. oh, blessed day! The Lord provided for us to get a NEW refrigerator!!! It took nearly two weeks to arrive, during which we threw away too much spoiled food, and longed for ICE CUBES for our water…. but no more! And this one is FROST FREE!!!!!!!! Yippee!!!!!!!!

Not only does it boast of a *freezer*, but even had a water dispenser, which model Dominique is demonstrating below! It only holds 3 liters, so we are refilling it constantly, but it is nice that the kids can get water for themselves and don’t have to be opening the door a million times a day. 🙂 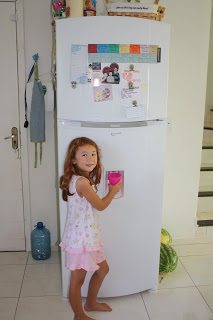