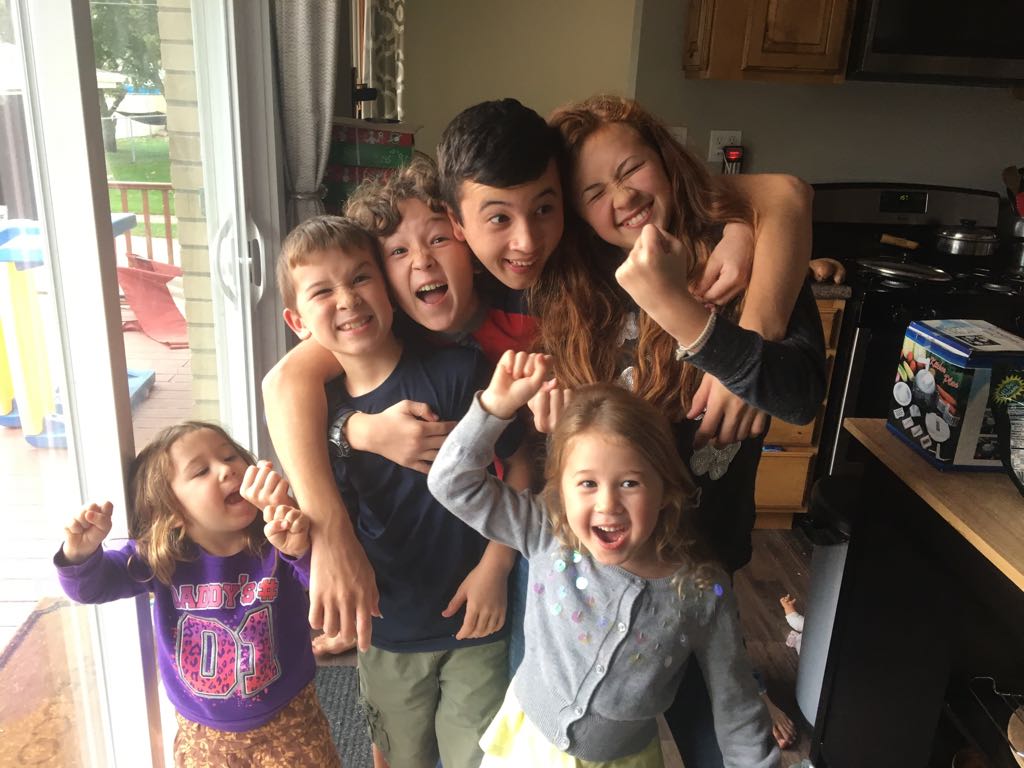 The Lord is MOVING us on!

This season of being in America has been chock full of EMOTION! Much of it has been very good and pleasant, like time spent with family and dear friends, and more trivial fun, like scoring some serious deals while treasure hunting at garage sales! But not all of it has been so pleasant – there has also been much stress in this transition… which lately I have more appropriately been calling “upheaval”.  The word picture I get is like a peaceful pond that suddenly gets abruptly and violently agitated, and all manner of sludge is dredged up from where it was hiding at the bottom, murky and lurking, but mostly unnoticed. Yep. That’s the kind of state we have been in for much of this season. But you know what? IT’S A GOOD THING! We really don’t want that sludge down there, do we? Even if it doesn’t seem to be bothering us too much as long as no one rocks the boat… the tendency is for it to increase with time if not attended, right? And what about on those unfortunately occasions when you have to get OUT of the boat for whatever reason and you actually STEP in that stuff?? Eeeewww… I have literally sunk up to my knees in certain ponds, and it is anything but pleasant. Soooo…. we are thankful for the cleansing that the Lord is working in us during this season, and we want to welcome it, because we WANT to grow and become more like Him! It was out of this place that Fabio preached this message at our church recently, in case you want to listen: Persevering to Victory. 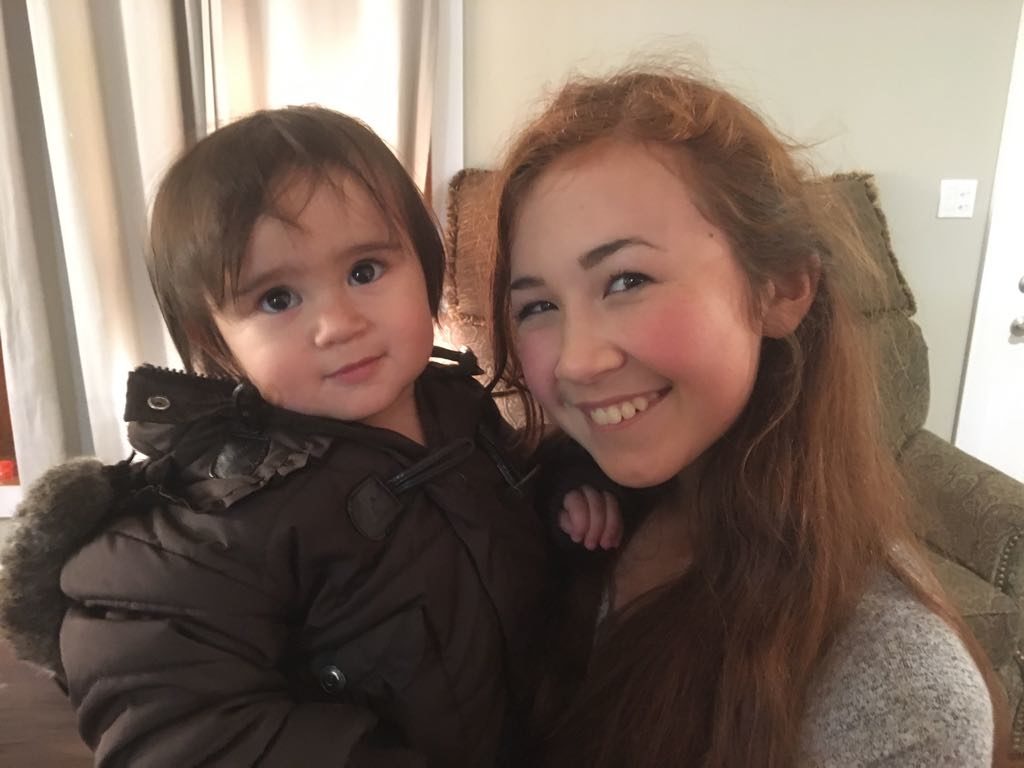 These are the most pleasant of times – enjoying family! Here is Dominique with her cousin, Alanna 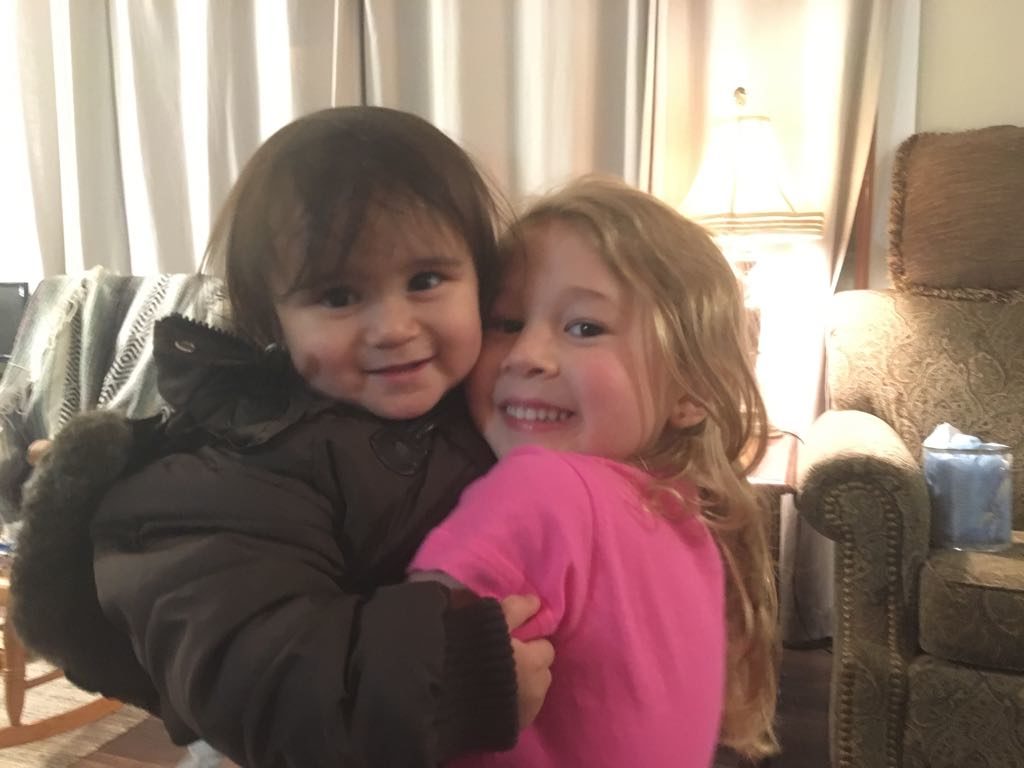 Well, as many of you know, we had planned to leave around the end of September, which would have been a total of about three months in the States, total. However… clearly that did not happen. There were many delays, some because we didn’t get our stuff together as quickly as we could have, but most were out of our hands. But not out of HIS Hands!

So about two weeks ago, according to the counsel of our pastor, we decided to push our dates back “about three months” to take off the stress and pressure we were living under while waiting for our visas and not having a time frame around which we could plan – putting about the end of January/ beginning of February as our new take-off goal. It’s a rough lifestyle for all of us for everything to be constantly up in the air, open-ended, uncertain, and make-shift. This would also provide us with the special opportunity to be in America for the holidays for the first time in NINE years. Nine. Meaning, our kids don’t remember it – especially the ones who weren’t born yet! Only Joshua has vague recollections, as he was six.

And then guess what happened? We breathed a big sigh. The kids rejoiced. The atmosphere in our home became more joyful and less tense. We were learning to rest and trust in His plan and His timing. And then…  and THEN… our visa documents arrived!!!! They had been issued on November 2nd, and from that date we have 90 dates to be in country. Which puts our last possible date to travel… drum roll…. February 1st! Just like we had prayerfully decided together with our pastor just a week before that! Talk about confirmation!! 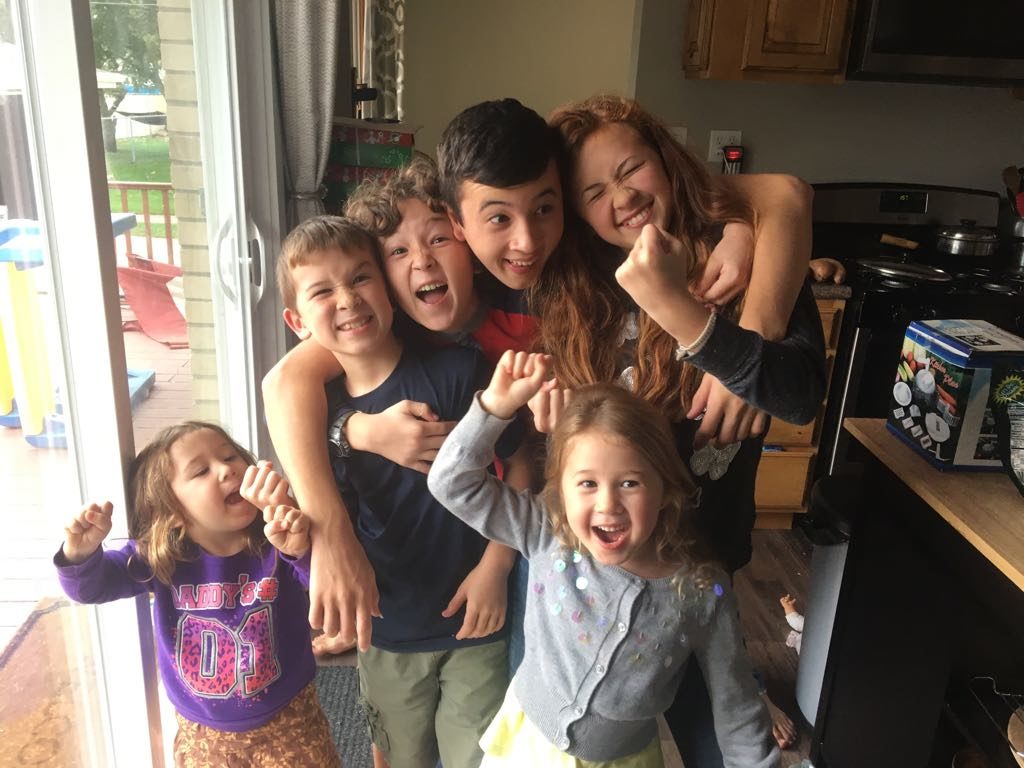 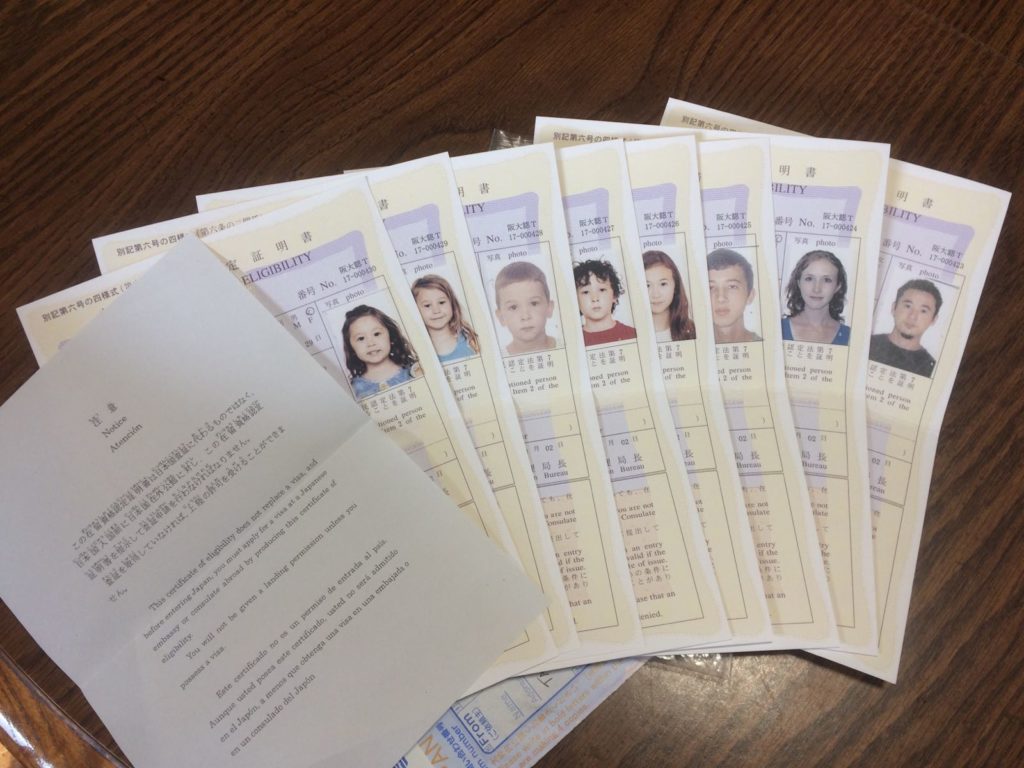 Our certificates of eligibility which we will take to the Japanese Consulate soon to receive our visas. 🙂

There was SUCH a sense of relief to have the visas come through. Now, it seemed real. A feeling of being “settled”, although nothing had changed in our situation. Our children were all happy about it! Even the ones who have had their struggles all through this year with the whole “upheaval”. And now we are suddenly seeing things come together!

First, some missionary “friends” (sorry to put that in quotations, but we had never met them in real life, only on facebook!) offered to carry some baggage to Japan for us! Now, get this! She is Brazilian, from near where we used to live, and he is American, from not too far from here! They are missionaries in Japan, not too far from where we are going! Sorry for all the exclamation marks, but can you believe that?! 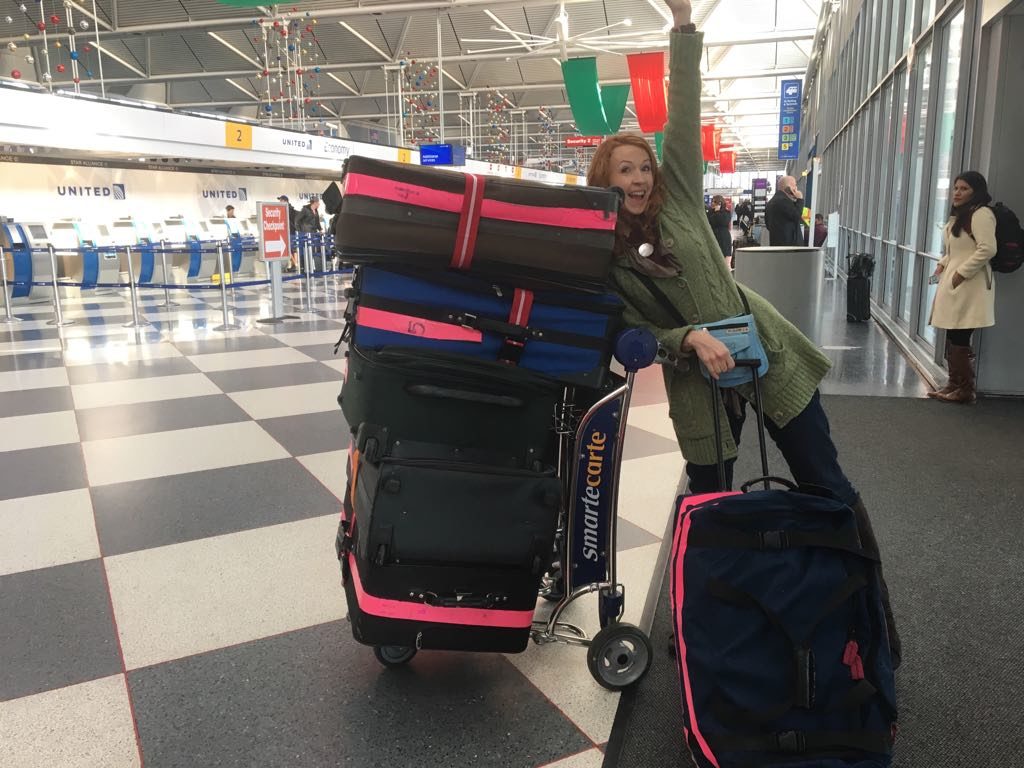 This is what our SIX pieces of luggage looked like!

So, they contacted us and offered to carry some suitcases for us, as their family did not have the full allotment this trip. I asked how many? (I was hoping maybe they could take two!) And she said… drum roll again, please! She said, ‘Six”!!  Can you believe that?! That is HUGE!

We met them at the airport this morning to deliver our six suitcases to them. And we left feeling a little bit lighter. Whew. 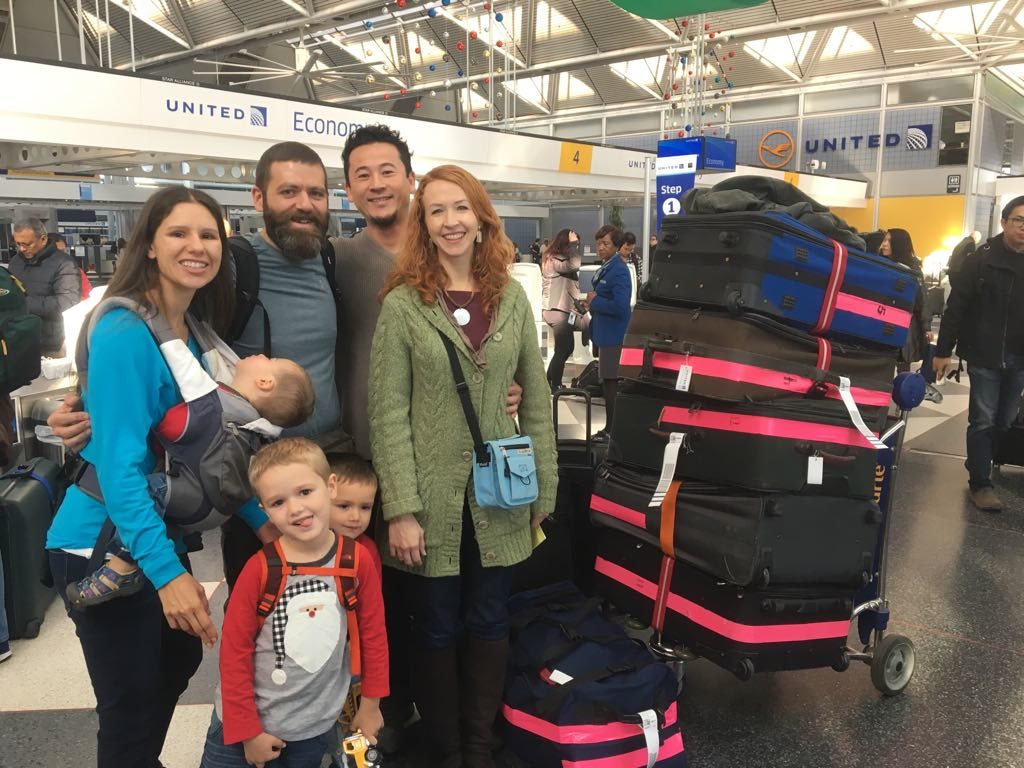 Praise the Lord for these guys! What a blessing!!

Another MAJOR thing that we are praising God for, that I just HAVE to share!

When we left Brazil, we left nearly everything behind and planned to virtually start from scratch in Japan, with the help of garage sales in America this summer to restock on clothes and shoes and such. Well… the biggest challenge for us is books. Besides the fact that I consider them dear friends, we also need a lot of books for ministry and most of all for homeschooling. Especially since we have six children, all on different levels. So, I pared down and pared down, but there were still EIGHT boxes that we were just going to HAVE to find a way to get to Japan. Regardless of the cost. They were probably 30lbs each, average. Well in the middle of our overwhelming move, we still hadn’t been able to find the best way to ship them, so some dear friends, Roberto and Pamela, offered to take care of that for us and let us know later, and we gladly accepted.

Well they didn’t tell us this until today, but the day after they lugged all the boxes to their house and put them in their living room, they went on a day trip for the entire day. When they returned home, they discovered that one of their children had left the faucet on in the bathroom, and it had about flooded the whole house! The whole living room was full of water, and they were panicky about our books. Well guess what? She said it was like an island where our books were – the only place that did not get wet at all!! And their floor is perfectly flat! There was no logical way that they could have stayed dry! She said it was a testimony to them of how God was taking care of us. Hallelujah!

But that’s not the end of the story!

They shipped one box as a test, and it arrived safely at Machida Church, where we will be serving in the beginning of our time in Japan. So, a couple weeks ago, as our time to go is nearing, they send the other seven boxes, and they all arrived safely! So Fabio asked for the bill and his account information to make a deposit, and they said it was a gift to us from them! Can you believe it?!?  Once more, I just have to say, “Hallelujah!” 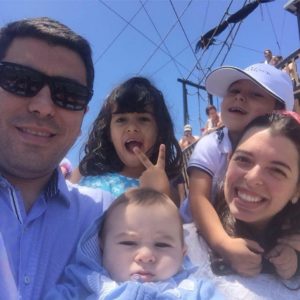 Praise the Lord for these guys who shipped our boxes for us as a gift! What a blessing!!

And the miracles don’t stop there!

Our next hurdle, now that the visas came through, was getting tickets for the eight of us. Fabio has been keeping an eye on tickets for months now, as they go up and down, checking different sites and different days. Well, today he went online to check, and found tickets for the day we were needing to travel for about $260 per ticket, with all the taxes and fees included!!! Usually, we need to buy 1 adult + 3 children at a time because the website doesn’t allow us to buy so many at once. Well, on the second purchase, the prices were way up there, then after praying, we saw the prices go from nearly $700 back to $260! You can read more about that HERE.

So… once MORE I just HAVE to say, “Hallelujah!!”

They forgot the most important word in this image: PRAYER!I hope you are rejoicing with us now! I know many of you have been praying us through this time of upheaval, and I can’t tell you how impactful that is in realms we can’t even see. THANK YOU for being on our team. Please keep praying us through, and we will keep reporting on how God is working through your prayers. 🙂 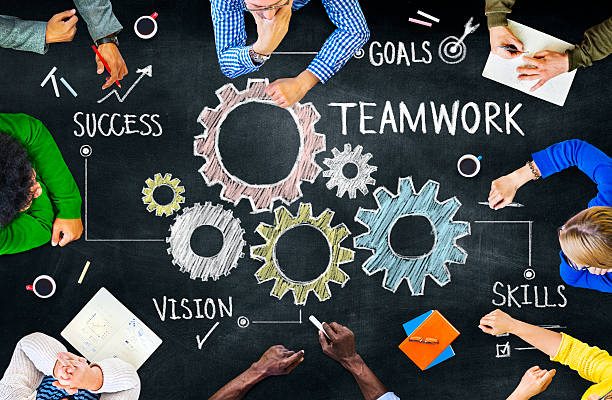 They just forgot the most important word in this image: PRAYER!

CHECK OUT OUR JEMS PAGE HERE