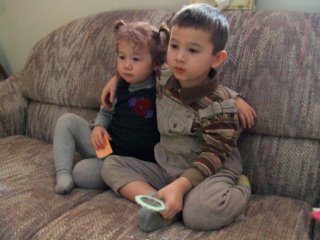 So they really DO love each other!

Guess what? I caught the kids being good yesterday and had to snap a shot of it! Well, I actually do catch them being good every day, just not necessarily to each other! They occasionally do play nicely together, but often they bicker. Sometimes it’s because Joshua has a program and Dominique doesn’t feel like going along with it, and sometimes it’s because Joshua is playing something that Dominique is too little to do right, and ends up wrecking it. Or other times, they just both want they same toy, or something like that. I once asked our pastor if there was a way to raise children without them bickering with each other, and he replied that yes, there was: you could raise them in separate houses!

Anyway, they are learning, and moments like these are encouraging to me! I had let them watch a zoo video and when I peeped in to check on them, I found them like this. Melted my little heart! And after my negative opening comments, I should add some positive ones! Lately they have been enjoying playing hide and seek together, even though Dominique doesn’t always get it. She often pops out of hiding just as Joshua comes into the room, exclaiming: “TA-DA!” And sometimes Joshua plays on her level to make her happy. The other day I heard him say to her, “Follow me, Dominique. Come on! Just relax!” I’m not sure what he wanted her to do, as I was sick and comatose that day, but it was cute. 🙂

They also like to do art projects together and usually do well sharing crayons and supplies. They are learning how to get along, little by little. 🙂 Too bad it doesn’t just come naturally, eh?

One of these days I will get around to ordering that little book with the clever title, by some of my favorite authors: Raising Cain without Killing Abel. Written by Christian parents of 15 children, I’m sure I will find some further helpful advice there. 😉

In other news, there isn’t much. This extreme COLD has been keeping us in, like it or not. We are running out of groceries and my list of errands is piling up. But one of these days, it’s bound to warm up, right? Until then, we are mostly hibernating. 🙂

But we actually do have really GOOD news: the carpet is being laid today in the basement!!! WOO HOO! I will post pics later. I am SOOOOOOOOOOOOOOO excited I can hardly contain myself! Now we will be busy “moving in” down there and getting things situated and re-organized.