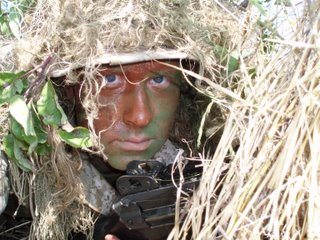 Today is the day he has been training for since January. My brother, Marine Corps Sniper Corporal Aaron P. Black will be shipping out today with his unit to Iraq. Please keep him and the rest of the troops in your prayers. He says he hopes they will all still be vertical seven months from now. Also please remember his wife, Suzy, and four children in your prayers as well.
I didnt write what follows, but I thought it was an appropriate reminder about what our men are going through in war. It is easy to forget, as we feel so comfortable here, but let’s not forget about them and what they are doing for us.

You stay up for 16 hours. He stays up for days on end.

You take a warm shower to help you wake up. He goes days or weeks without running water.

You complain of a “headache”, and call in sick. He gets shot at as others are hit, and keeps moving forward.

You put on your anti war/don’t support the troops shirt, and go meet up with your friends. He still fights for your right to wear that shirt.

You talk trash about your “buddies” that aren’t with you. He knows he may not see some of his buddies again.

You complain about how hot it is. He wears his heavy gear, not daring to take off his helmet to wipe his brow.

You go out to lunch, and complain because the restaurant got your order wrong. He doesn’t get to eat today.

You go to the mall and get your hair redone. He doesn’t have time to brush his teeth today.

You’re angry because your class ran 5 minutes over. He’s told he will be held over an extra 2 months.

You call your girlfriend and set a date for tonight. He waits for the mail to see if there is a letter from home.

You roll your eyes as a baby cries.He gets a letter with pictures of his new child, and wonders if they’ll ever meet.

You criticize your government, and say that war never solves anything. He sees the innocent tortured and killed by their own people and remembers why he is fighting.

You hear the jokes about the war, and make fun of men like him. He hears the gunfire, bombs and screams of the wounded.

You see only what the media wants you to see. He sees the broken bodies lying around him.

You are asked to go to the store by your parents. You don’t. He does exactly what he is told.

You stay at home and watch TV. He takes whatever time he is given to call, write home, sleep, and eat.

You crawl into your soft bed, with down pillows, and get comfortable. He crawls under a tank for shade and a 5 minute nap, only to be woken by gunfire.

You sit there and judge him, saying the world is probably a worse place because of men like him. If only there were more men like him! 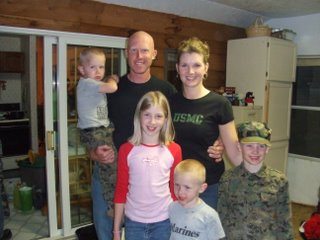 Aaron without the paint and garb with his family. 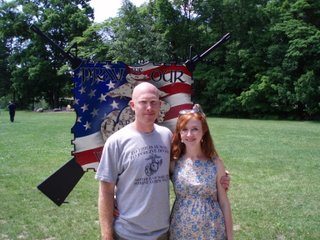 Aaron and I in June, the last day I was able to see him. Behind us is a sign that our brother, Scott painted, that reads: “Pray for our warriors”.