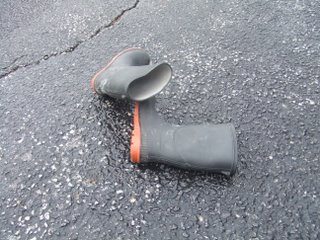 Mud boots, serving their purpose… discarded on the driveway! These are too big for Dominique, and she cant walk well in them, but she has outgrown her other ones. She tried removing them three times, and I finally quit trying to keep them on her feet. 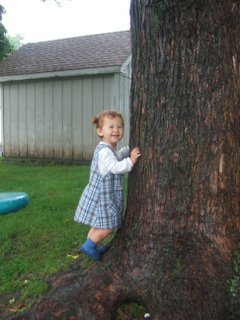 She was much happier once she could walk around freely in her sock feet! Good thing she wasn’t wearing white socks! (Incidentally, she is starting to recognize and say her colors. Her “favorites”, or at least the ones she can say the best right now are green and blue. I think they were Joshua’s first ones, too.) 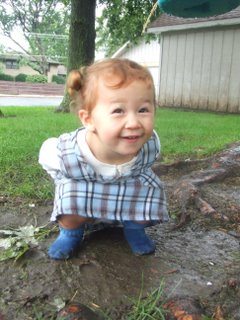 She was being unusually cooperative with the camera today, so I had to take advantage of the opportunity, and I did get quite a few cute shots! This is a sampling of my favorites.

What a big girl! She is looking less and less like a baby to me now, and rightly so. She will be two next month, and soon there will be a true baby joining our big girl! 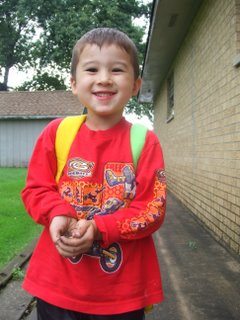 Joshua’s cheesy grin was induced by finding a whole treasure heap of worms! He has been dreaming of fishing, and collecting worms in the meantime. 🙂 The only time he has been fishing, they couldnt find any worms and used grapes instead! The fish did eat the grapes, but apparently grapes slip off of hooks too easily, and they didnt catch any fish. This time he will be armed and ready! 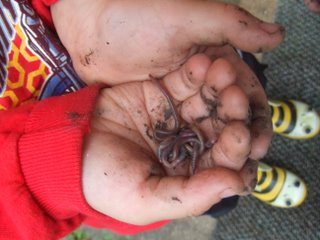 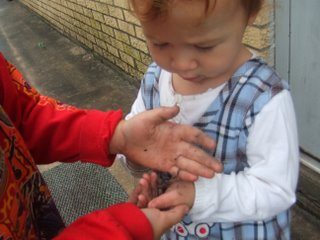 Letting Dominique hold his worms. She was a bit apprehensive at first, but eventually accepted his gift. He had an ulterior motive: he had found a pile of BB’s outside the Royal Ranger shed that he wanted to collect instead of worms. 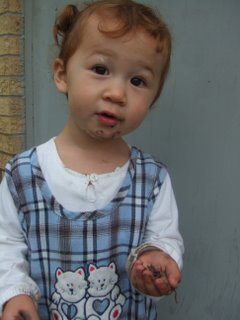 “They’re kinda wiggly, but I think I like them!” 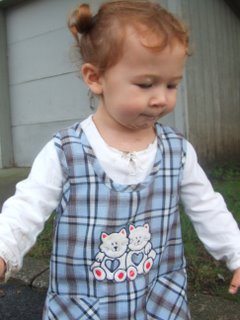 “I wonder what will happen if I run with them, swing them around, and squish them between my fingers??” 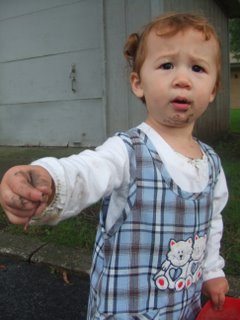 “You know what? I dont think I like these things after all! They are too squishy! After all, I am a GIRL!! You take it, Mommy!” 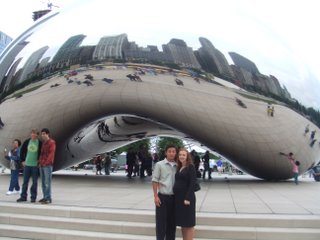 This last picture is of Fabio and I in front of the big bean at Millenium Park in Chicago. Fabio took me downtown on Saturday night for a special date… for my birthday! It’s not often we go out without the kids, and it was nice, but ya know what? We missed them! Everything we saw, we wanted to show them too, so we think we will just have to go back and share the joy!