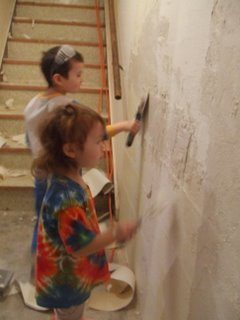 Well, blogger is being dumb again and keeps deleting my pics for no particular reason, *after* I’ve waited forever for them to be uploaded… ugh. So, for now, what you see is what you get!

Fabio is still putting finishing touches on the basement, but the actual real end is in sight! The trim is done, the doors are painted, and now the stairwell is done too. That is what Joshua and Dominique are helping with here. 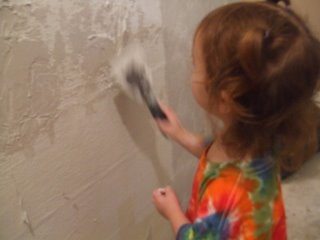 Fabio couldn’t drywall the stairway or it would have made it too narrow, so he decided to texture the block walls to add some character. He is so creative! 🙂 Since that is something that doesn’t have to be nice and smooth or anything, the kids got to help and had a blast doing it!

Of course, Dominique had to try it on another freshly painted wall, but other than that, it went great!

It is so good for them to get involved in real life daddy projects! I’m so glad Fabio takes the time (and extra work!) to let them help when he can. Joshua especially thrives on it, and declares himself to be a carpenter. He says that when he gets just a *little* bit older, Daddy’s gonna talk to his boss to see about hiring him on! 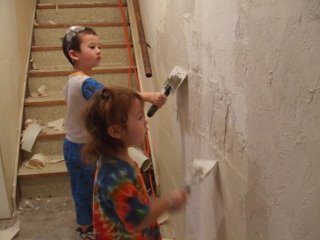 I think the last last last thing is the built in shelving, and then the carpet will be laid in about a week and a half! YAY! The light at the end of the tunnel! 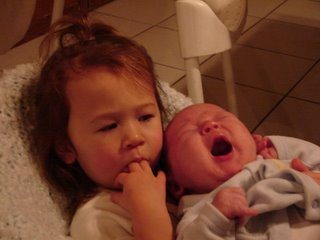 Dominique and Joshua are both asking constantly to hold the baby, which is great! Usually Israel is fine with that too, but sometimes he is less than thrilled with the change of hands.
Here Dominique is thinking, “I have no idea what to do with him when he cries like this, but sucking on my fingers at least helps me feel better!”
Joshua’s preferred method of calming Israel’s cries is to sing “Jingle Bells” rather loudly in his ear! I’m not too sure why he picked that song, but it doesn’t always seem to have the desired effect. It does possibly drown out some of the crying, though! 🙂 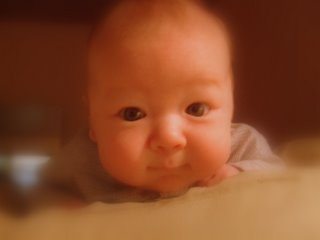 This is Israel last Sunday, the day he turned 6 weeks old. Tomorrow he will be 7 weeks already! Already he looks bigger than in this pic. Today I really noticed him pushing himself with his arms rather than just lifting his head up! I’ll have to try to get some pics of that soon. He still loves to be on his belly, awake or asleep. Even being held, his favorite position is on his belly, over my arm. Sometimes is it kind of frustrating because I want to LOOK at him, but he often starts fussing if I turn him around. So, back to his belly he goes!

I haven’t really taken any pictures this week, though. These are all from last weekend. I tell ya, every time I *think* I’m just about back on the ball, I fall off again! LOL. It has been one thing after another. This week I had a really “fun” case of mastitis that kept me down for a good couple of days. My temp reached 103.6 and knocked me out! I have had similar infections before, but never this bad. The Rx? Rest, extra fluids, increased nursing, hot compresses, echinacea, mega doses of Vit C, and plenty of raw garlic. 😉 The raw garlic was especially fun to ingest a clove at a time! I once heard that eating raw garlic makes you lose weight. It actually doesn’t, but your friends tend to stand so far away from you that you look smaller. 😉 Well, it wasn’t from the garlic, nor was it my preferred method of accomplishing it, but being sick did take off a few more postpartum pounds. Hey you gotta look at the bright side, right?! Also on the bright side is the fact that my mom was able to come help, and that I was comforted to know that I was not contagious!

I asked a few moms of many when I could expect things might get back to normal and they assured me that in about five to ten years, things should be much easier, regardless of how many more children have come along by then, as long as I am being diligent in training now. I think that was encouraging! I’m sure we’ll have a lot of fun and make a lot of memories in the meantime. 🙂