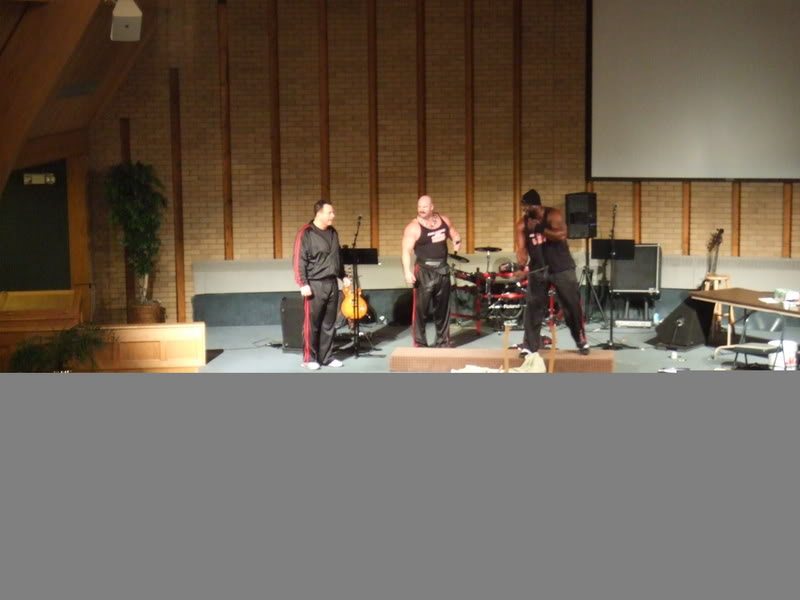 Power Force and the Most Beautiful Children in the World!

Well, this week was unusually busy, after a long time of hibernation! Funny how fast things can change. Last week the kids were practically begging to go somewhere, *anywhere*!, and this week, on Wednesday when I announced that we didn’t have anywhere to go that day, they both shouted, YAY! I think we had worn them out!

It started with a busy weekend, last weekend. Here we are on Sunday evening at our church with John Jacob’s Power Force, formerly called the Power Team. 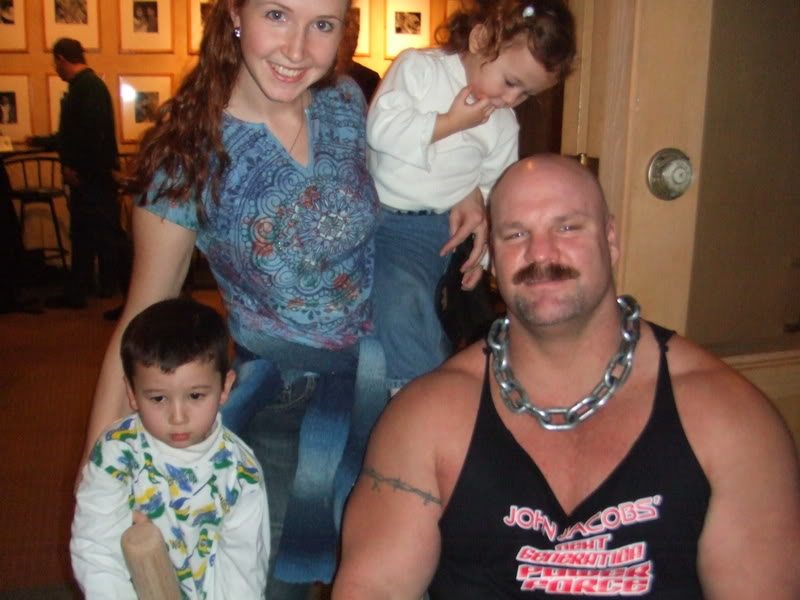 They are a group of really BIG guys that travel the country and world performing feats of strength with the goal of bringing a message of hope.

I was impressed both by their strength and by their testimonies of how God had amazingly changed their lives and rescued them from sin ~ gangs, drugs, and prison ~ and filled them with joy, peace and hope.

The church was PACKED! 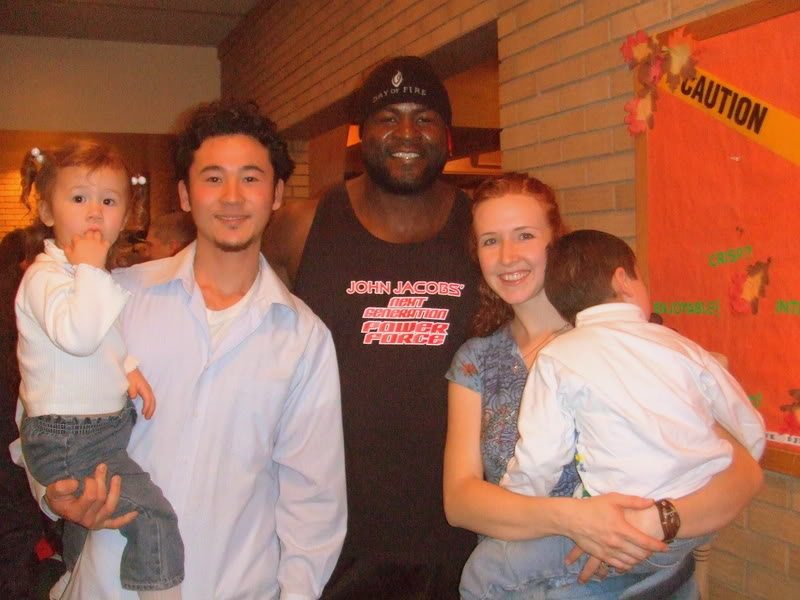 Some of the feats they performed included breaking baseball bats, rolling up a frying pan like a burrito, snapping an “indestructible” Lowe’s hammer, ripping two license plates in half at once, breaking cans of soda pop on their heads and on our pastor’s head!, and breaking out of handcuffs!!

As you can see in both of these pics, Joshua was scared to death to get his picture taken with them, even though he loved the show, from a safe distance! He got to take home a broken baseball bat with their signature. Not sure what we will do with that now! 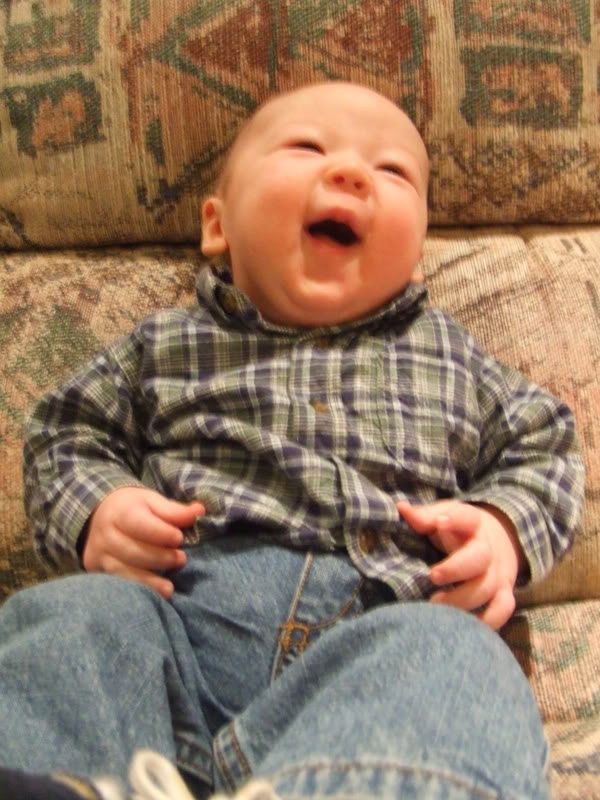 And here is my little darling. Unfortunately, I was holding the camera to the side, trying to get him to look at me and smile instead of just staring blankly at the camera, and so the pic turned out a little blurry… Still sweet, though. 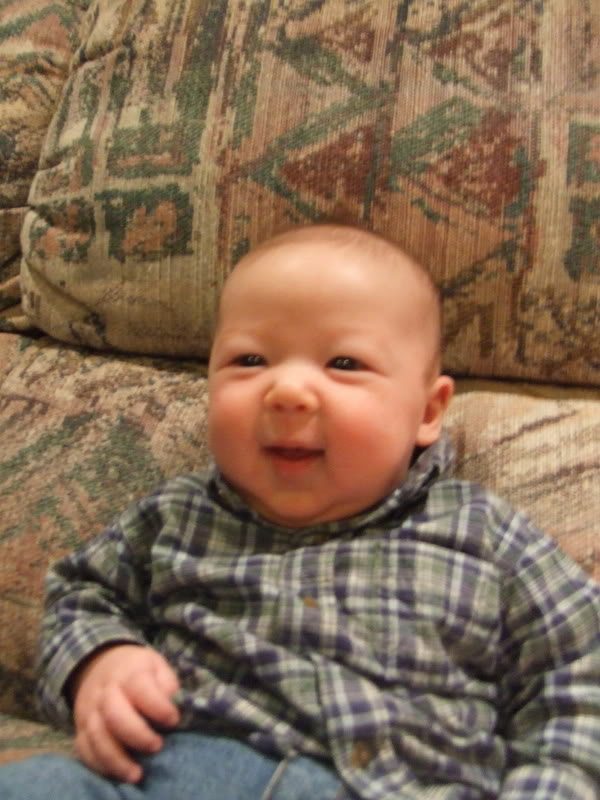 Here he is again, 2.5 months old, looking as beautiful as ever ~ not that Im biased! 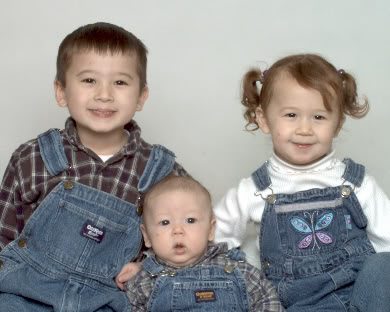 Then yesterday I took the kids to get their pictures taken for the first time with all three of them.
I had finally found overalls for all of them, and I wanted to get the picture taken in time to get it back before we go to Brazil. 🙂

I think it would have been better to have them all in white shirts, but Israel didnt have one, which is why I went with the flannel for the boys… Oh well. 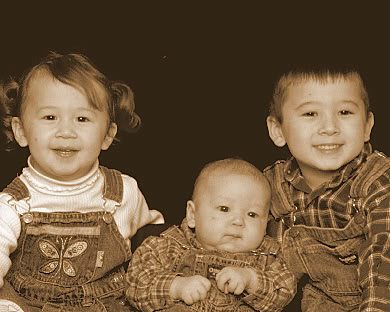 Which do you like better, the white background or the black? I’m the one who changed the black background one to sepia though. 🙂

We had quite a time trying to get Israel to smile! I finally figured I’d just settle for him looking and the other two smiling, because every time we would get him to smile, one or both of the other ones would look at HIM instead of the camera, or something similar. Arg! 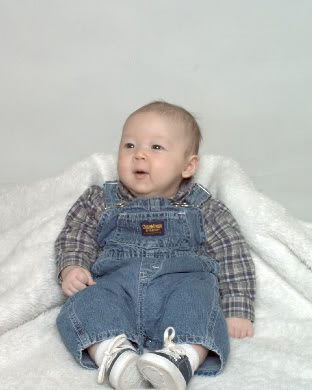 One of Israel alone. 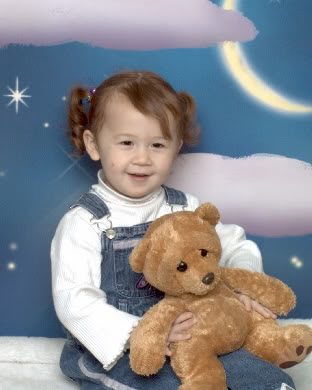 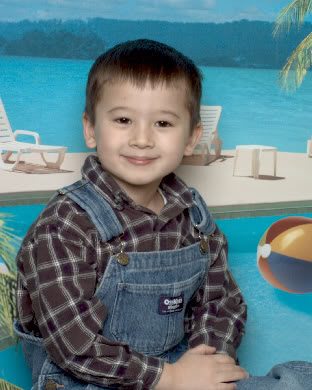 I let Joshua choose his own background for this one and he picked this in anticipation of Brazil! 🙂

We were able to go this past Monday to the Brazilian Consulate downtown to sign Israel’s Brazilian birth certificate and apply for his passport. We should have it by next week. Now we are only waiting on his American passport, which we will probably have to call to expedite this week. And then we will be all ready! Woo HOO!