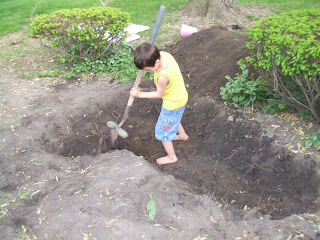 Last year we cleared this area and I planted my garden here. It did come up fairly well, but did not turn out to *produce* much, because there is so much shade. So, I couldn’t decide what to do this year. I thought of trying to have the garden elsewhere, but with seventeen large trees in the yard, pretty much everywhere is shady! Nice for picnics, not so much for gardens…. 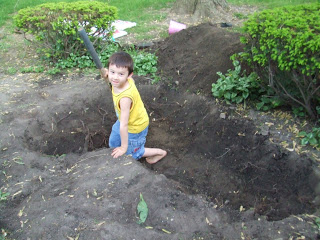 After mulling over it quite a bit, I had a “great” idea! Why not dig a pond there instead of a garden?? We’ve been trying to create as much of a wildlife habitat as possible in our backyard, and that would be a great project for the kids, right?

So, we gave Joshua the shovel and he went right to town. He did a pretty good job on this hole, eh? He slept good that night too!

Just kidding! I actually started the digging and was planning on working on it a little at a time over the course of a week or so, but Fabio started to feel sorry for me and decided to come out and help! So, he did most of the digging and it was done in one evening! Look at those strong muscles! 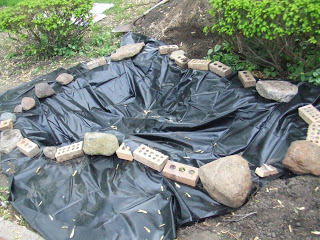 The next morning I got a pond liner and we hunted for rocks that might be hidden in the bushes around our house. Here are the ones we came up with that Joshua and I could carry. We found a few really large ones that we could NOT carry, that Fabio helped us with later. 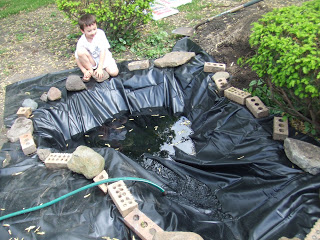 Then, we started the fill up! 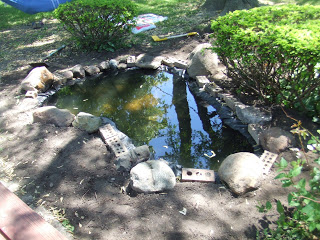 This is a few days later, after I moved the dirt back around the rocks to cover the liner. (That night *I* slept well!)
Fabio had also brought the other rocks around by this time. We would like to get some more flagstones, but we can’t invest a whole lot at one time, so we will probably collect them a little at a time. Until then, the bricks will help fill in the gaps! 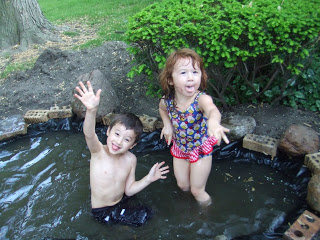 Well, once we finally got a really hot day, the kids just couldn’t help themselves! They just HAD to get in there! So, here are our little fishies in the watering hole. 🙂 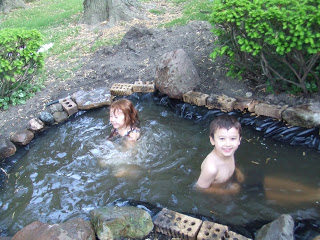 They had such a blast slipping and falling all over themselves! Fabio and I just had to smile at them – their laughter was so contagious! Fortunately, Israel was sleeping, so I didnt have to worry about him at this time. 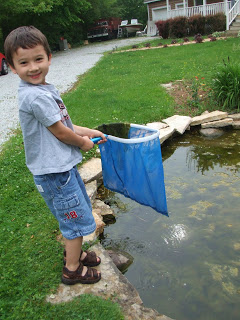 But, they won’t be able to keep getting in there all summer because yesterday we moved to Pond Project Phase Two!

We visited the pond of some friends of ours and collected MANY, many tadpoles, which we introduced to our pond. 🙂

The kids had SO much fun scooping up the slimy little wigglers! 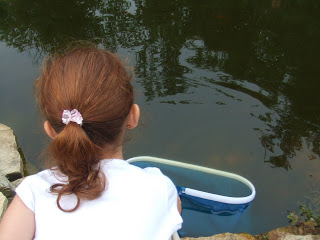 I had been afraid they might be hard to find or hard to catch, but this pond was just swarming with *millions* of them! All we had to do was put the net in the water and it was full of tiny wrigglers! 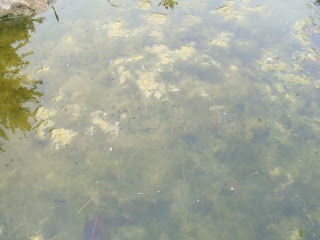 If you click on this picture to enlarge it, you will be able to see the many, many tadpoles all over the place. 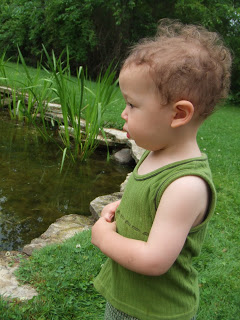 Israel was too intrigued with it all to take his eyes off the pond and look at the camera, but that was okay.
He was nicely camoflauged with the background, too, don’t you think?

Next, we plan to introduce some plants, both in and around the water.

And the next project on our list is to build and mount a bat house to take care of any potential mosquito problem triggered by the pond water. 🙂
(ONE bat eats about 1,000 mosquitos per night! They are really nice to have around.)
Oh, and if our tadpoles survive, they will eventually help with the bug issue too. 🙂