Olivia Glorianna and the Glorious Revelation

Olivia Glorianna and the Glorious Revelation

Many of you followed, heard about, prayed for, or participated directly or indirectly in Olivia’s birth process and know how everything was turned upside down during that time.

Sometimes we need a “everything turned upside down” moment in our lives so the Lord, who is in control of all things, can wake us up to something we may not be seeing.

“being confident of this, that he who began a good work in you will carry it on to completion until the day of Christ.”  Ph 1:6

Elizabeth was in labor for three days with little progress, after which baby’s heart beat was going up and Elizabeth was coming down with a fever besides. Several people who were praying for her said, “I felt like we were fighting for her life.”

I shared this with many, but realized that since many prayed, helped and read the blog post about the birth adventure, they should also know the second part of the story, or the “whole story”.

After the baby miraculously came out before we even had a chance to get to the hospital, we went home and everything seemed fine —  God had done His glorious work! Well, it was actually just starting…

As you already know, Elizabeth was admitted to the hospital two days later with a very high fever. She was tested for many kinds of things and treated as if she had an infection. Well, long story short, she was discharged on the second day as she seemed better, but they never found out for sure what the problem was.

We arrived home and as soon as she went to bed to rest, we noticed her fever had come back. So, filled with indignation, I anointed her with oil and prayed fervently prayed for her and the whole house. As I continued to press in and was seated by the bed, the Lord “opened” my eyes to see the real problem:

I was hit with a conviction that I was the cause, and the problem was that I was not taking care of her as I should. We are not the kind that argue or yell at each other at all (although we did in the past!) and thus some underlying problems went unnoticed for many months. We knew at times that there was something between us, but I just could not see what it was until I had this strong impression on my heart: “If you are not going to take care of her I’ll take her away“…
I broke into tears and told Elizabeth what I had just heard from God. She cried too and assured me that she had a confirmation in her heart that that was the problem and that this was the breakthrough that was lacking – the missing piece for her healing. As I apologized over and over and we hugged and cried and prayed together she said, “If all of this was for the purpose of bringing us closer together, it was all worth it!”.
After that powerful time of reconciliation, we checked her temperature again and, sure enough, it was normal.  It never went up again after that breakthrough moment.

The next day, however, she started having some sharp pains going up the back of her neck into her head and some other weird symptoms. We tried to take care of it with Ibuprofen and thought maybe by the following day it would be better. The following day came and it was all just as bad. We called the hospital and they said it could be a blood clot and we should go quickly to the ER again.

Well, we did and they ran even more tests. They did all the tests they could think of and again, could not find a thing wrong so we were sent home with Ibuprofen.

Sunday came and Elizabeth suggested that I share with the children about the breakthough that had happened. I decided that was a good thing to do as they were also affected by all that was happening in our lives. We had a beautiful time together of sharing, confessing and forgiveness. (And of course, lots of group hugs.) After that time, Elizabeth noticed the pain in her neck had disappeared, and to this day, it has not come back!

We read and hear so much today about absent fathers and how much that can affect a family. Life in this world can be very busy with many things that draw our attention away and get us distracted from our priorities and the things that really matter.

With this note, I would like to encourage you fathers, to turn your hearts back to your family. By no means would I say that the same situation that happened with us would happen to you, nor that you would find the solution or the cause to any type of problem you may be experiencing in your home, as God works in a unique way with each person.

But I do want to strongly encourage you, as leaders of your homes to ask God for wisdom to lead your homes, loving and caring for your wives as Christ loved the church and gave himself up for her, taking upon yourselves the responsibility of important decisions and not being passive about it; leading/teaching/training/correcting your children and not passively throwing that on your wives’ shoulders. That we would be courageous men fighting for our families in a world where families are falling apart because of many reasons, including men that stepped back from their roles as fathers and husbands.

May God help us.

“Husbands, love your wives, as Christ loved the church and gave himself up for her.”  Ephesians 5:25

Now all is well in the Tsukayama family, and yes,  even better than before. Thank you all for your love, prayer and support. 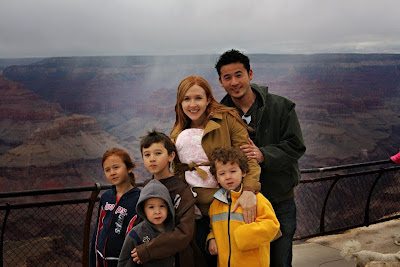 During the season that all this was happening, a movie called Courageous “fell” into our laps, which was greatly encouraging to me. I am the kind that like fights, battles and war movies, but this is by far the movie that shows us the most important battle fathers/husbands have.