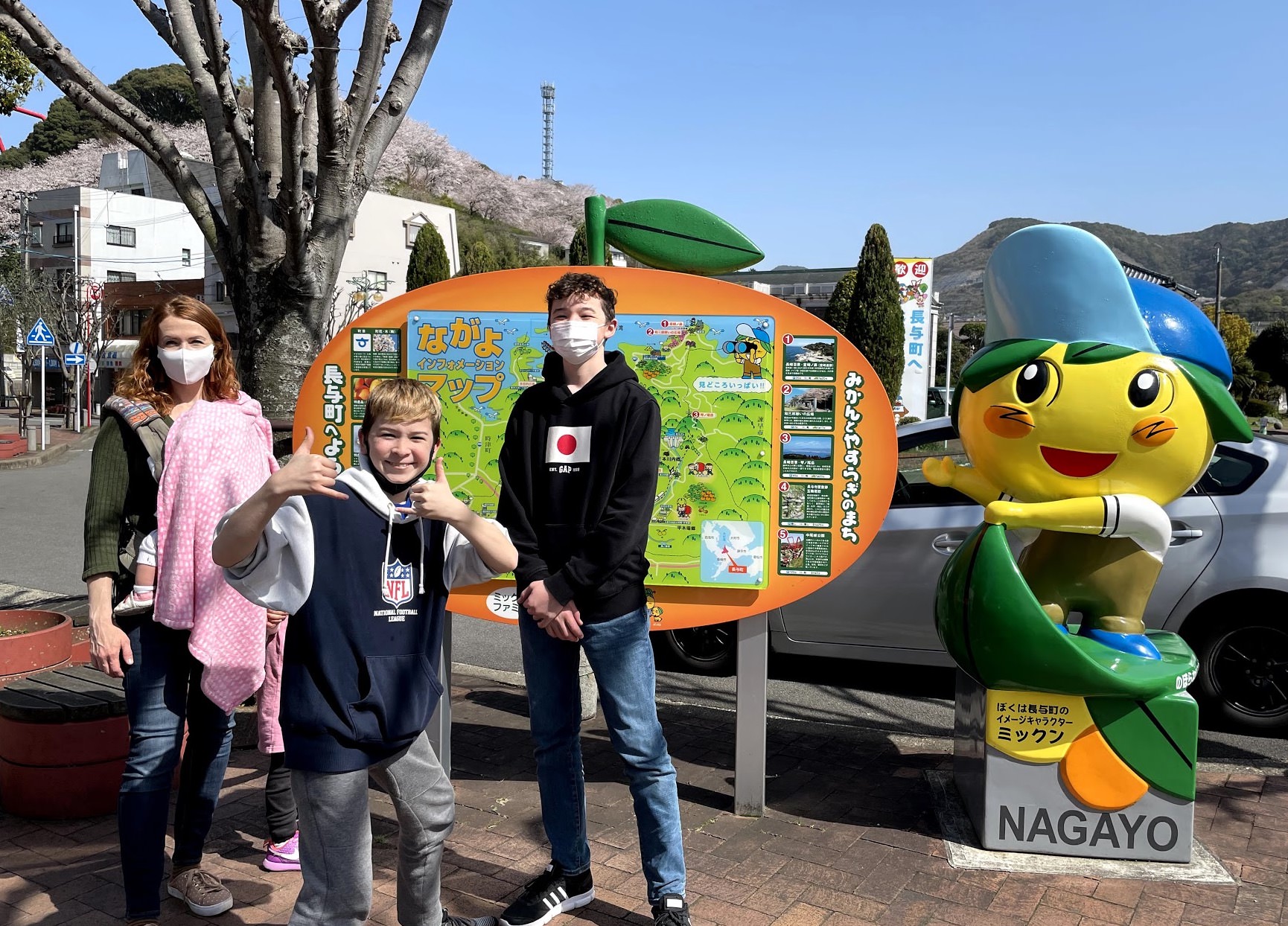 We have very exciting news! We are actually on our way to Nagasaki now!

*Due to Covid-19, JEMS mailing address has changed for now. From now on, please send your checks to this address. Possibly, this will be the mailing address until the end of the year. We’ll keep you posted: JEMS, P.O. Box 86047, Los Angeles, CA 90086-0047

In March, we spent spring break plus some traveling to Kyushu, the southernmost major island of Japan. We “squeezed” the 16ish hour long trip into three days, haha, taking the opportunity to visit Shiga, Fukuoka, and then on to Nagasaki. Each of these stops could easily be a blog post, as the Lord blessed us at each step along the way, but alas, time is limited. 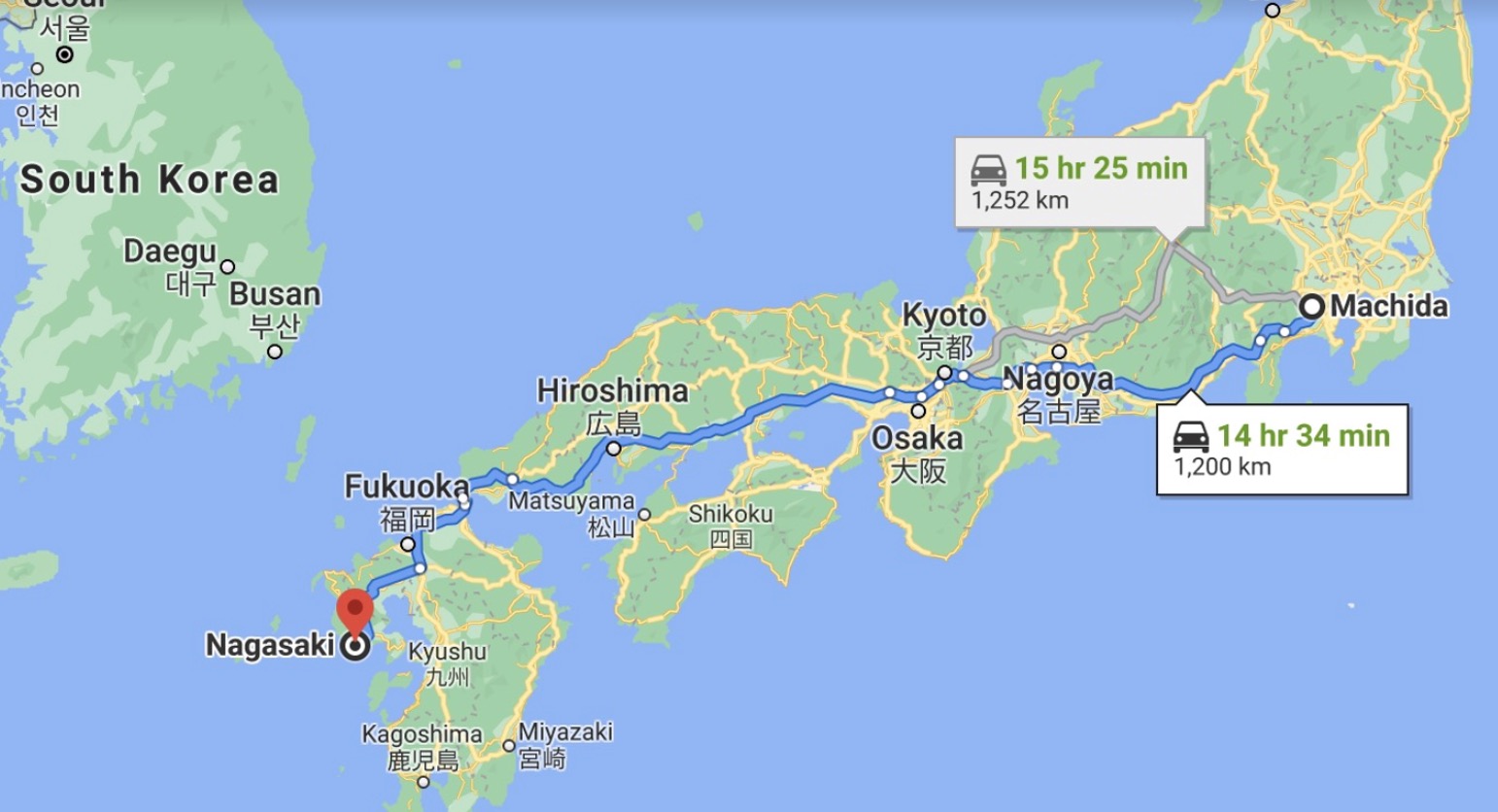 In Nagasaki, we went straight to house hunting. We had to look hard since homes (and families) in Japan are generally small. After the past three years of living in an apartment and having NO yard, our hearts longed for a bit of outdoor space for the kids to get some fresh air, and hopefully set up a trampoline for them to use their energy! By God’s mercy (!), despite what many realtors in the area said, we found a house that is not only spacious enough for our family but it has a bit of a yard that is big enough for a trampoline. Yay!! 🙌

Besides that, it is RIGHT around the corner from a large park where they can run, play ball, etc! We believe this is the place the Lord led us to and we both had peace after praying about it for a few days before signing the contract.

We visited Nagayo-cho (the town we have been praying for) also, twice, with the kids. We had a lovely time going to some parks, meeting people and praying over the town.

Our mission agency, JEMS, also has some missionaries in Amakusa, about 3 hours from Nagasaki. We spent three days with them, fellowshipping and getting to know these awesome people. They arranged for us to stay in an old style Japanese farmhouse that belongs to one of their English students. No one lives in it currently, but we got to hang out with the owners and they became like surrogate grandparents to our kids! We also had the privilege of helping with an Easter outreach at a park. 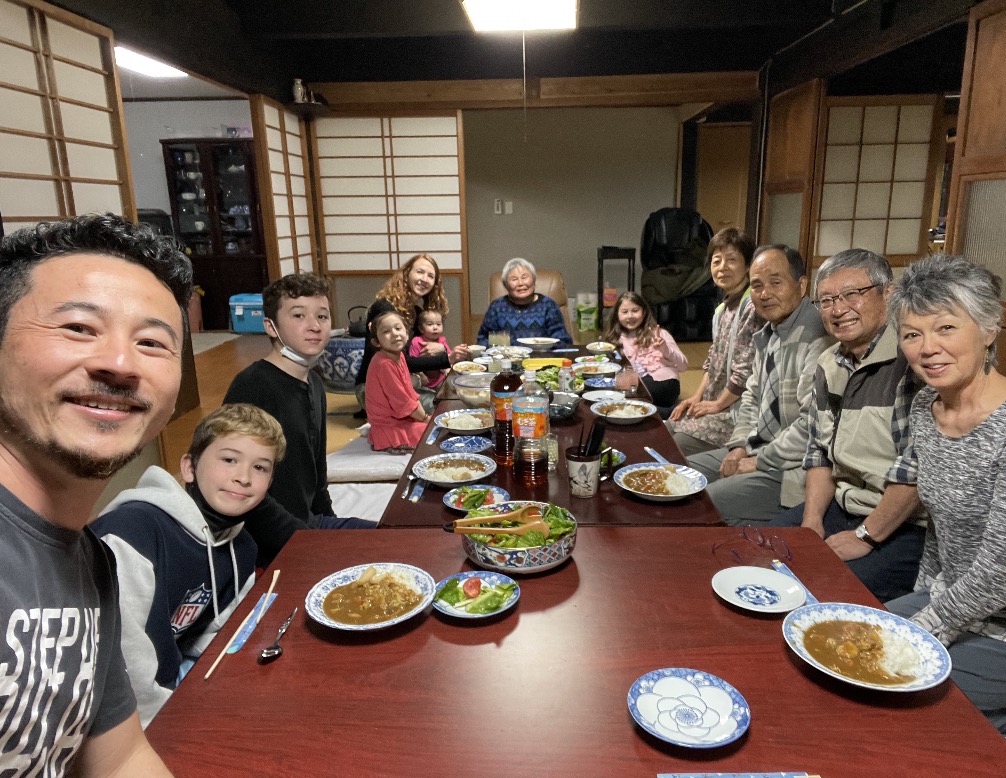 Because of Covid, they couldn’t officially announce it or invite people. So they decided to just show up at the park and ask whoever was at the park if they wanted to hear a Bible story and participate in an egg hunt. Then they asked me (Elizabeth) to share a five minute testimony at the end. It was Serenity’s birthday, so I told how she was born one year before, but we found out she had a liver disease. She had an operation, but that did not make her liver work properly, so we were told that if she didn’t get a new liver, she could not live. So her father, who loves her so much, allowed his body to be cut open, so he could divide his liver and share it with her, so she could have life. Then I told how each of us has a disease, not in the liver, but in our hearts. And our Father, who loves us so much, gave not a piece of his liver, but his whole LIFE so that we could have a new heart and life in abundance. After it was over, a lady approached me. She had “just happened” to be in the park, and heard my story. Turns out, her daughter was also born with biliary atresia and had a liver transplant at 8 months old! She was able to make connection with the local church, and I trust that the Lord brought her to the park that day for a reason!

There is much more that we could say, but we are in the throes of the moving process! It’s intense!

DETAILS OF THE MOVE

– May 9th we leave Machida/Tokyo.

We are mainly taking our personal things (clothes, books, oven and a couple of book shelves) as most of the furniture and appliances either belong to the church or we purchased used, which makes it cheaper to buy another one there than pay to move it. 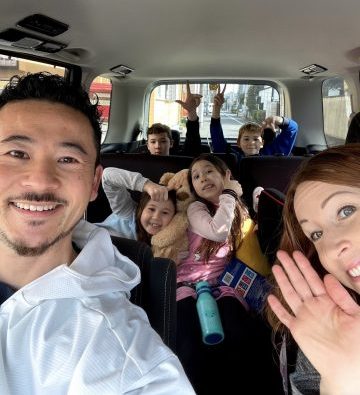 CURIOUS FACTS ABOUT RENTING IN JAPAN (It has its exceptions)

– Usually, there is a 3 month worth’s rent that we pay upfront as a security deposit. Supposedly it would come back at the end but, after asking for more details, we learned from the realtor we shouldn’t expect it back. Fabio is not even allowed to fix things himself. “That’s how the system works”, other people said…

– Another month’s rent cost is the realtor’s fee.

– Other than that, there is insurance fees and guarantee’s fees. The realtors say: “If you will rent, just think the rent cost x 5 as a starter…

– Another “interesting” expense in Japan: Public middle school requires a specific uniform. Johann and Israel have to wear a suit and tie. Well, the interesting thing is that each student’s whole set uniform cost a whopping $600!!  🤷

– In Japan, going out by bicycle is more than leisure. It is an important means of transportation.

– Expressway cost: How much would you spend on a 700 mile drive in your country, using the expressway? Do you get upset when tolls go from $2 to $2.15 each time? After this trip, we missed paying that much! From Machida to Nagasaki, we spent about $250 in tolls – Each way! Gas is well over $4/galon.

– At times we get blown away by the cost of doing things. Yet, we are constantly reminded of how God has proven himself to be our Provider and the owner of all the silver and gold, as He says in the Word, several times. Why several times? Because we constantly forget to put our hearts on the right treasure (see Mt 6:21). Still, He is gentle and patient enough to remind us over and over and manifest His power, even in our finances. Whether as a giver or a receiver, God has shown us that He is true to His word and that He honors those who honor him, even with finances! Therefore, we will not be afraid but will continue to march on!

– Monthly rent will be $1100/month. (Thankfully, the enormous “starter” cost we have covered!)

Now we are stepping out of the boat. We have been in expectation for this time to come and now that the door is open wide, we know there are many unknown things we will face. We have two options though:

1) be moved by fear and stay in the boat we are in now;

2) believe His voice and step out in faith that He will go before us. 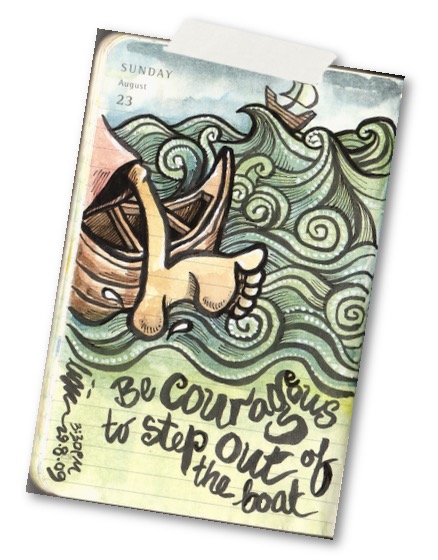 We have chosen the second option. There is no doubt in our hearts since He has been guiding us every step of the way, opening and closing doors, providing and blessing His mission to reach the unreached people He died for.

As Kingdom people, you have been with us in much prayer and financial gifts. Thank you for walking with us as we advance onto the unreached areas in Japan, a country where less than 1% know the eternal hope we have in Christ.

Could we ask you one favor? Would you pray and consider joining us financially to meet the needs of this new season? Whether monthly support or one-time giving, we will be deeply thankful.

We know that everything we do, we must do as unto the Lord and that He will bring forth the fruit. His Word does not return void. But everything has to start somewhere and by someone. As for us, we will continue to walk forward, press in and believe always. It all may start small, but it doesn’t stay there! We saw that in Brazil and believe He will do the same here. We know that everything in this world will pass, and it is passing (we feel it man!). But all that is done for the Kingdom will last forever and will have a reward, even now and into eternity.

Thank you for joining us, my friend. You and I know it’s worth it !!!

Once again, ARIGATOU (thank you).

“Yet he did not waver through unbelief regarding the promise of God, but was strengthened in his faith and gave glory to God,  being fully persuaded that God had power to do what he had promised.”    Romans 4:20,21 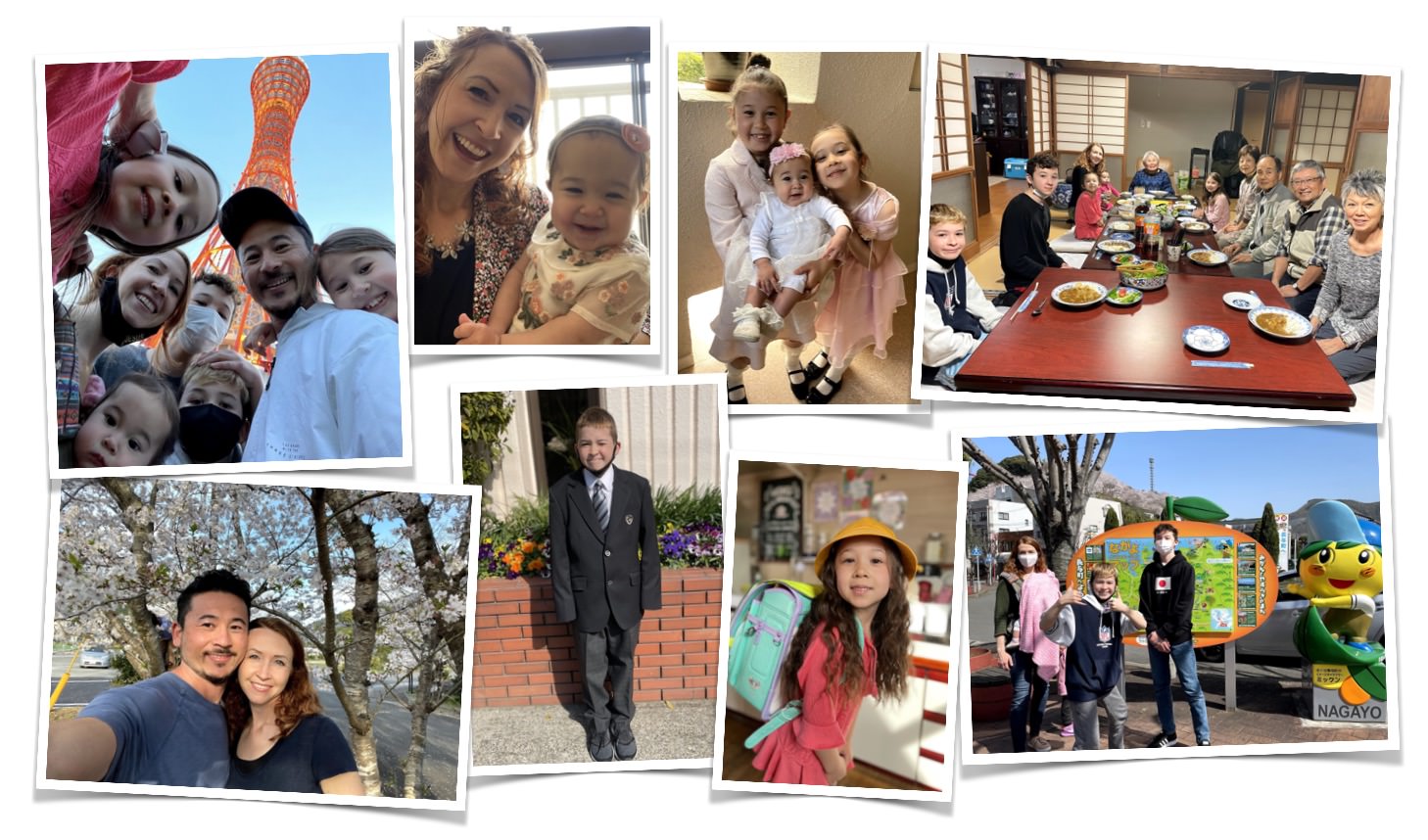 IF YOU WOULD LIKE TO PARTNER WITH US OR INCREASE YOUR GIVING:

GIVE QUICK AND SIMPLE