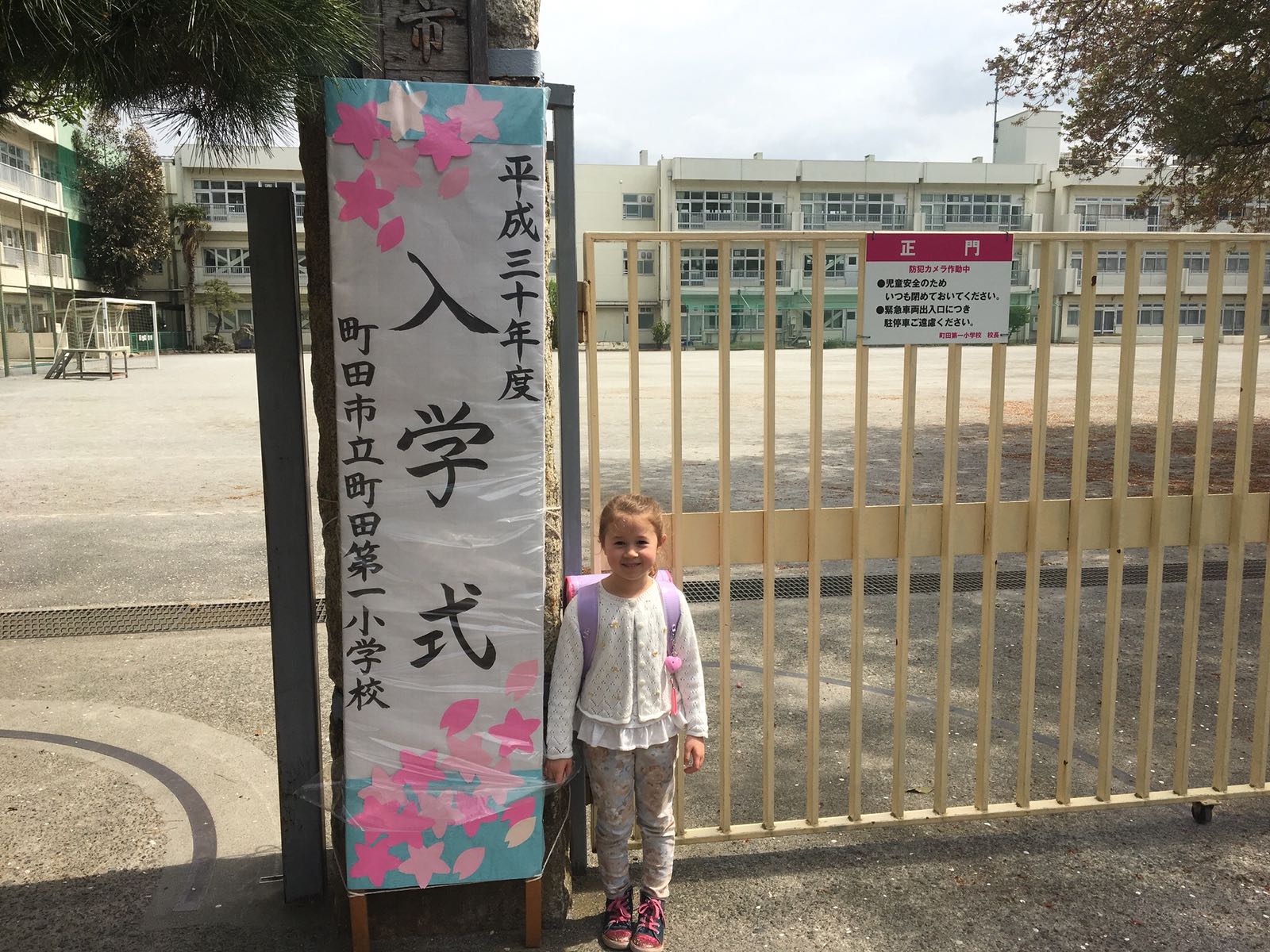 More About School in Japan

In this post, I explained why we decided to send our boys to school in Japan, and in this post, I told a bit about how it went during the first while – that is, February and March, which brought us to the end of the Japanese school year, followed by two weeks of spring break, and then the new school year begins the second week in April.

The requirement for beginning first grade is to turn 6 years old by April 1st. Olivia’s birthday is March 29th! So, she would just barely make it into first grade in April. Which I wasn’t sure was a good idea. I went to the Secretary of Education and explained that, because we had just come to Japan, she could not speak Japanese, and her birthday was SO close to the cut-off, I thought it would be better for her to wait another year and start first grade next year. But my request was denied. They are not too flexible about things like that in Japan.  So we began to ready her for her big debut, with some excitement and also a decent dose of foreboding.

These next three pictures are of the day of the entrance ceremony… which is a bigger deal than I thought it was, and we were way underdressed. Oops. Anyway, on that day, they only have the ceremony, meet their teacher, see their classroom, get their textbooks and such and then go home. In the second picture, you can see the special backpack called a ‘randoseru’ that all of the elementary students must wear. They are very expensive, but we were blessed for Olivia to get one for her birthday from our friends here! 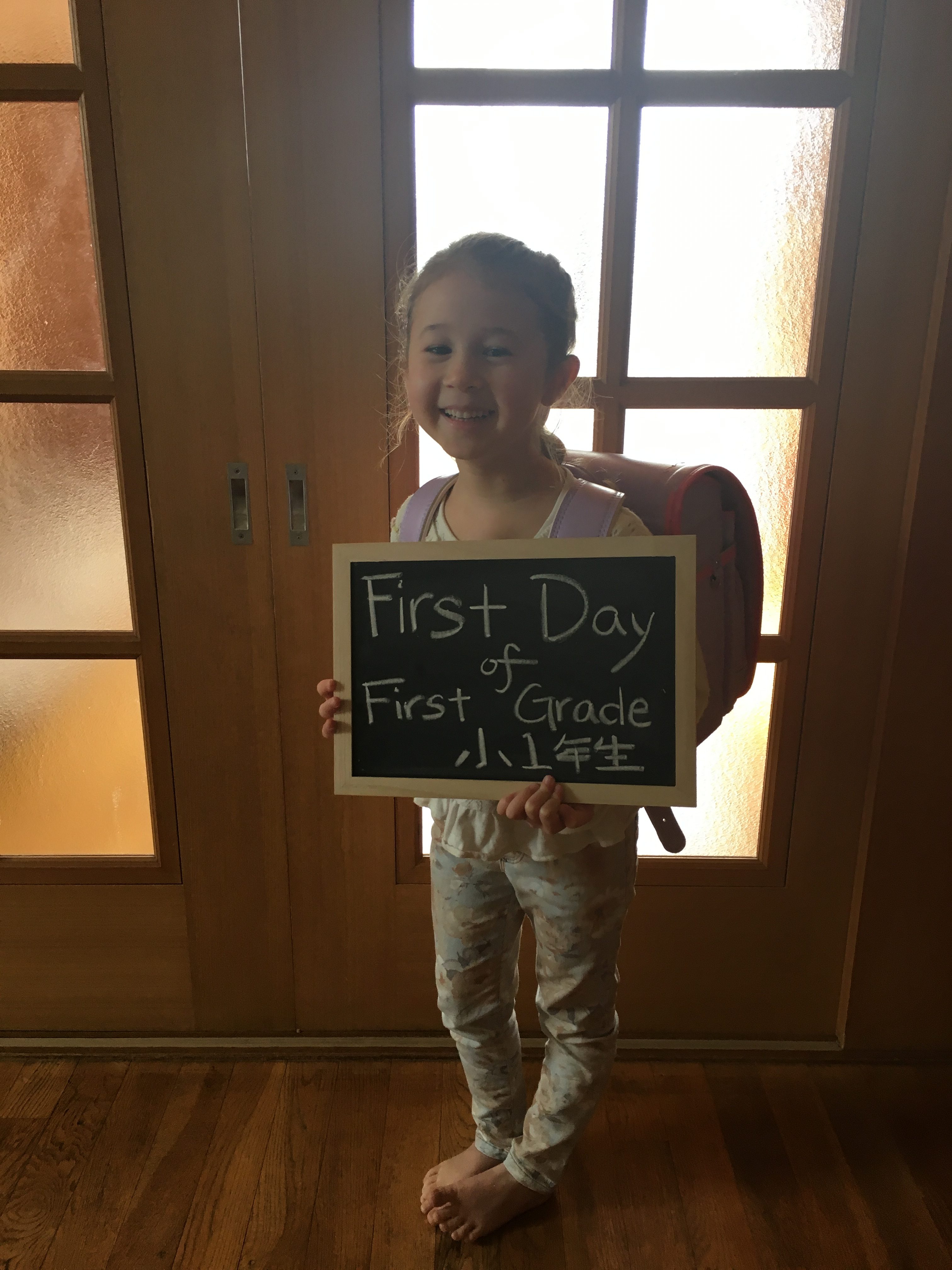 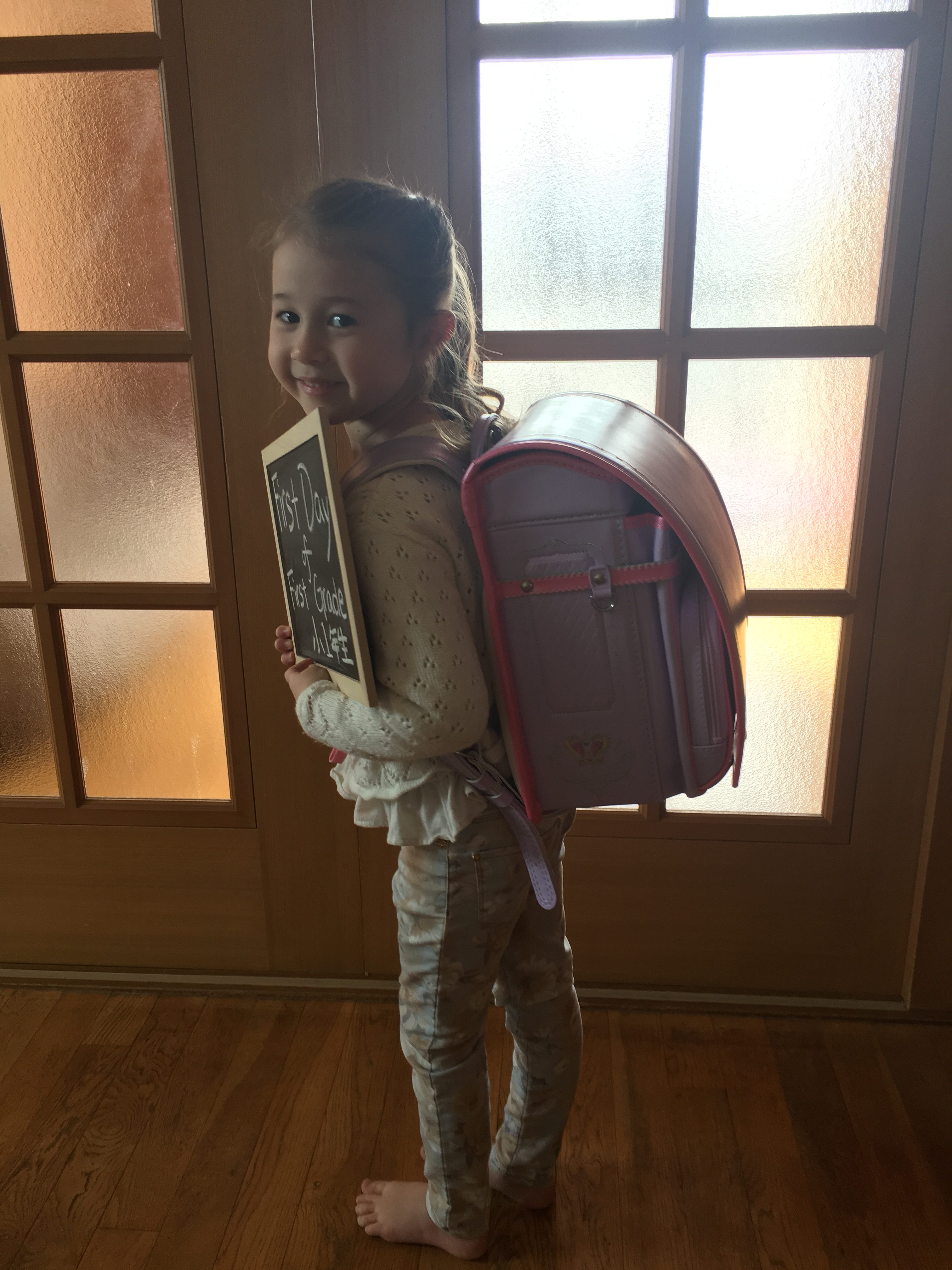 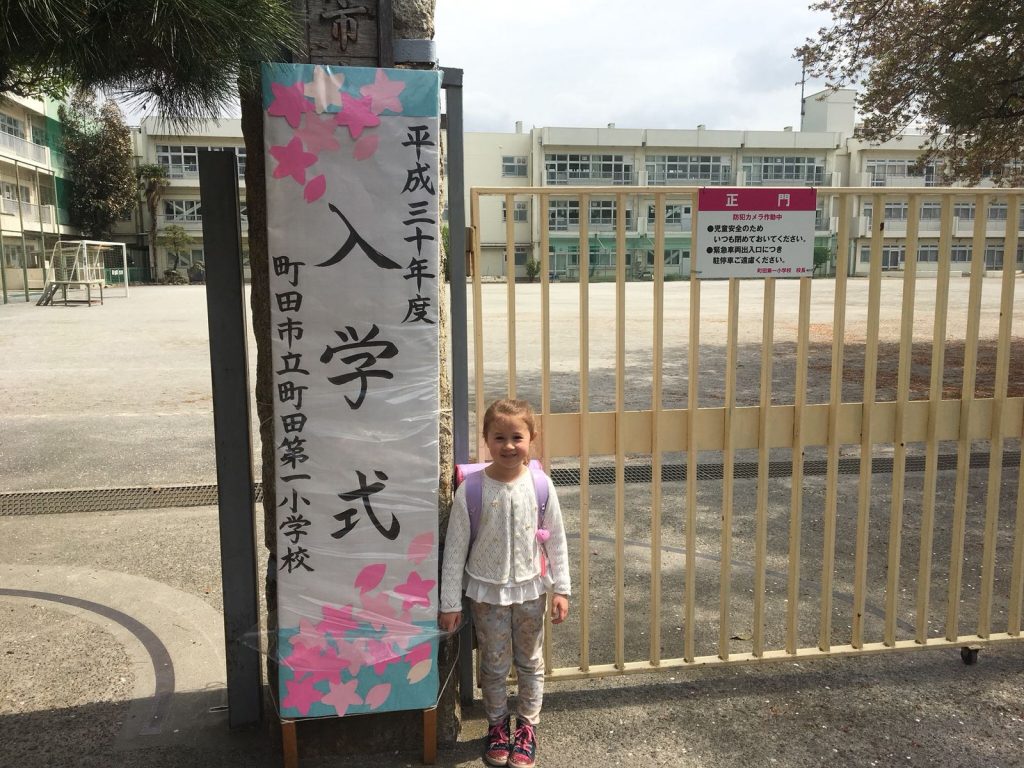 Then there is Dominique. She believed that she would literally die if we sent her to school, and after prayer and consideration we decided it would be best not to force her, but to continue to homeschool her. One big problem that we had in the early months here was trying to fill her idle time! Her brothers were not home during the day, she didn’t have available many of the things that she was used to doing (like an oven to bake up some goodies!), she didn’t feel comfortable going places by herself, and didn’t know anyone to visit or invite over. She studied diligently, but it didn’t fill her day. I had her help me with various tasks, and we would go places sometimes, but basically, she was bored. We enrolled her in an intensive correspondence program for Japanese language, and even got her a membership at a gym nearby that has a pool, but still… she was bored. Too much. It was not a very “up” time for her, as the idle hours gave her space to pine away for all she had lost.

At the same time that she was feeling bored and lonely, she saw Joshua enjoying life, playing basketball after school, communicating in Japanese better than she was even though she was studying harder… and she started to get interested. She started walking to school with him every day and often met him to walk home together as well. A few times she even went to his basketball club and watched him play.

Long story short… we talked and talked about all of the pros and cons and possibilities, and decided that she would also start to go to school when the new school year began, April 6th. Whew!

These are them in their uniforms on the first day of school. In our district, they have to use uniforms beginning in 7th grade. This sure makes deciding what to wear each day simple!  The elementary students can wear whatever they like, but the first graders have to wear a yellow hat, and have a yellow cover over their backpack for traffic safety, as they all walk to and from school alone. 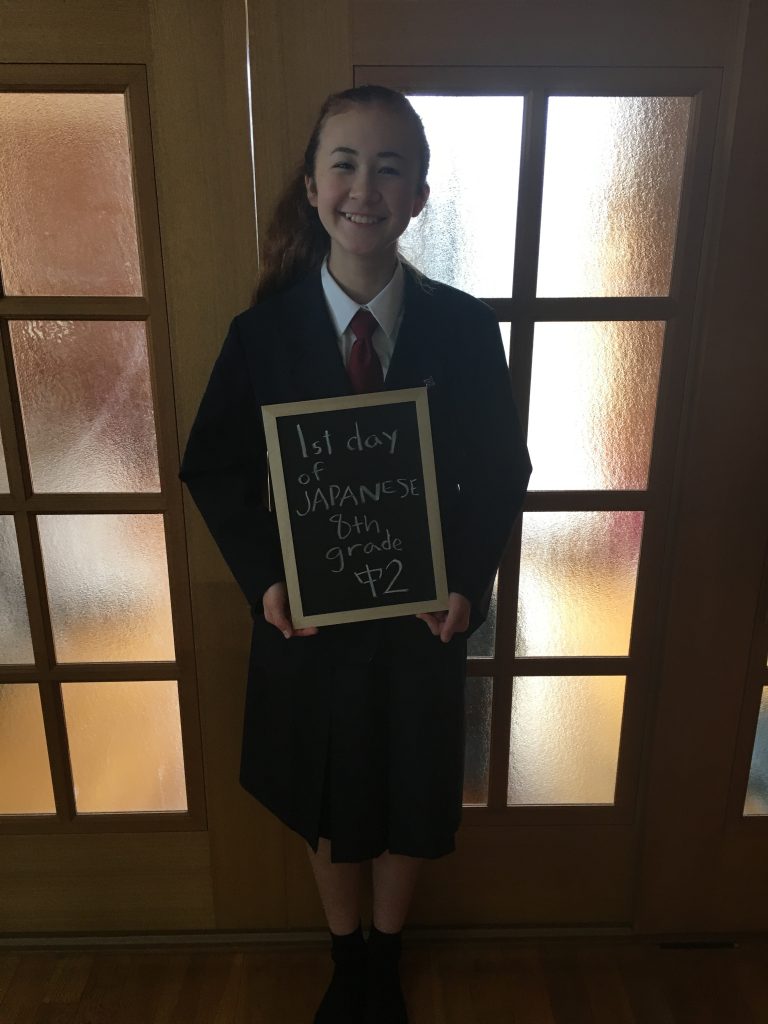 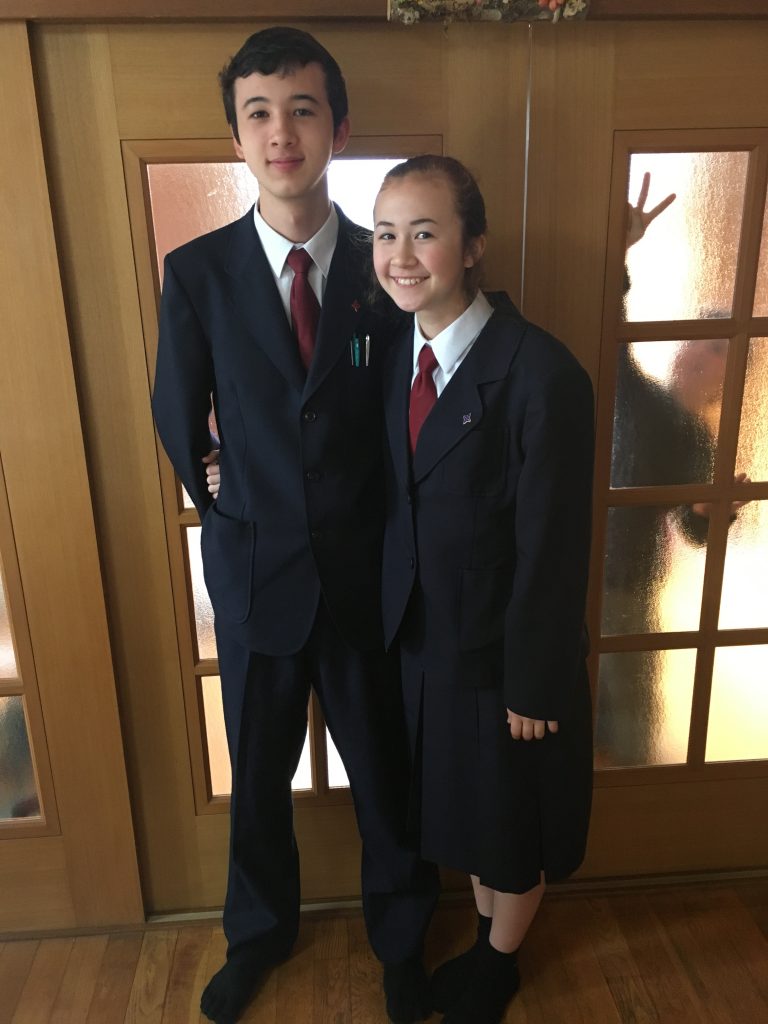 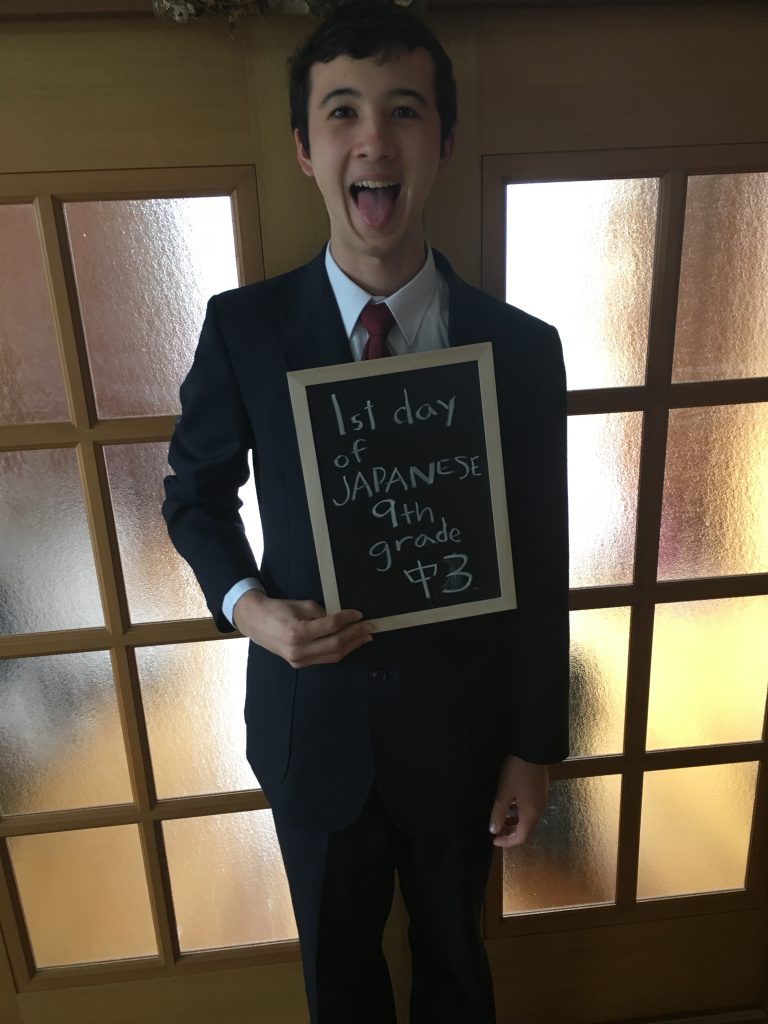 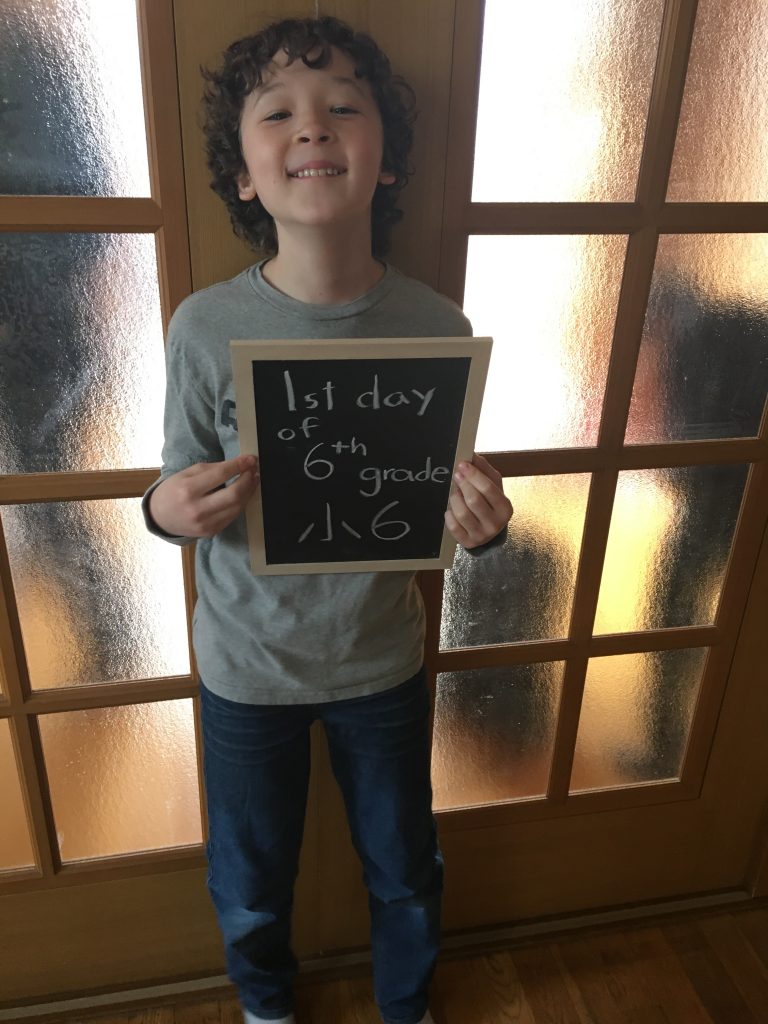 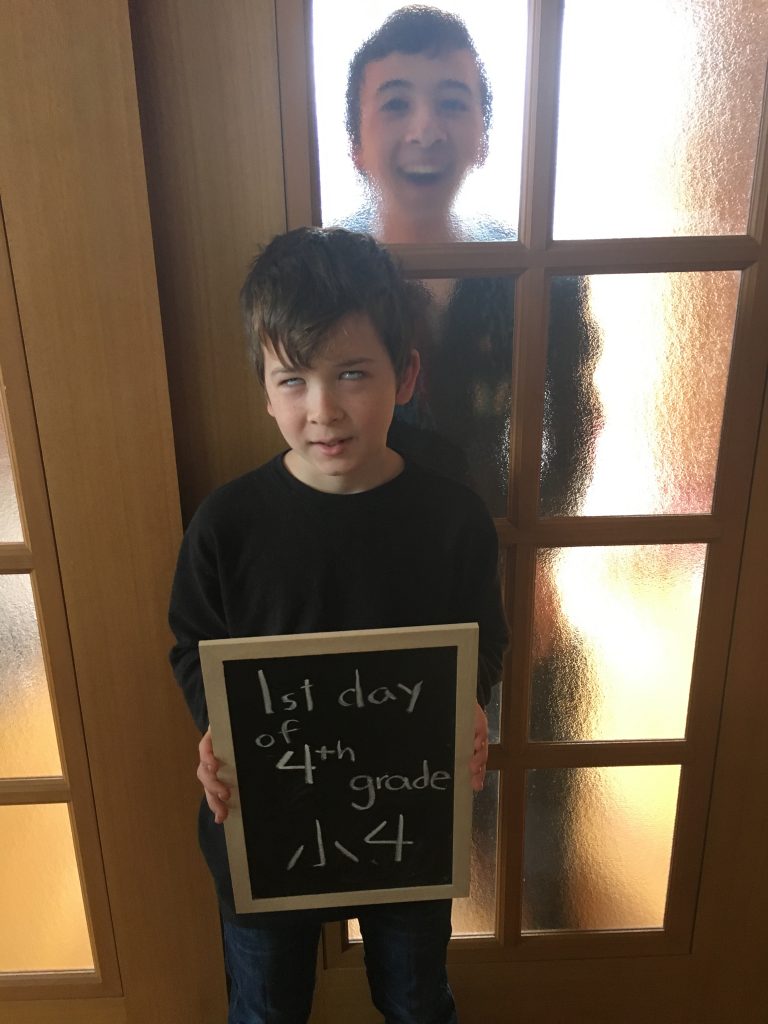 This picture unfortunately reveals how Johann felt about going back to school after spring break, but the good news is that now, several months later, he is much happier about the whole experience.

Here we are leaving the house on the first morning! Thankfully, both the elementary school and the middle school are just a few minutes walk from our home on the third floor of the church. 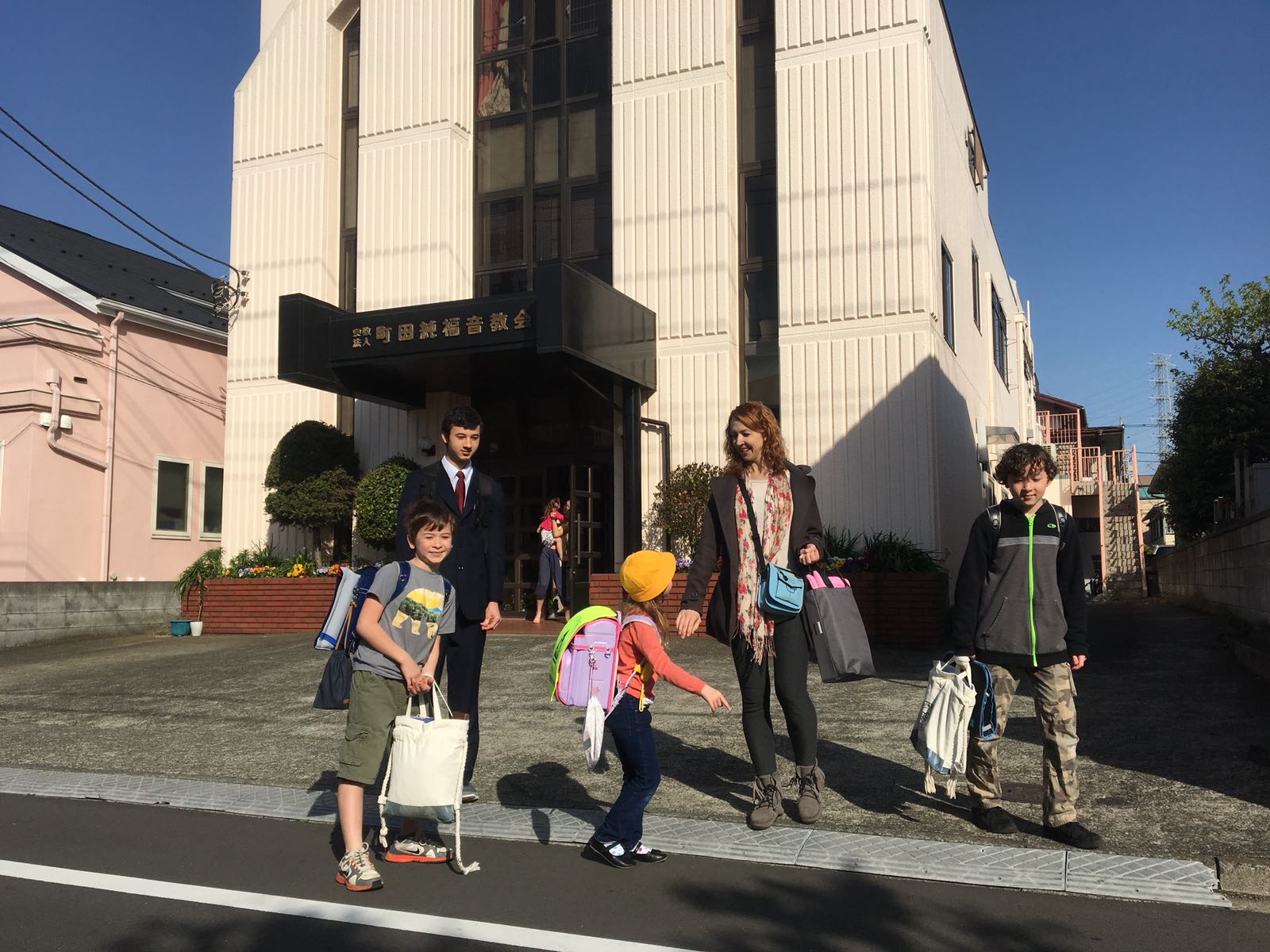 On that first morning of class, Olivia cried and said that she didn’t want to go. During the first week the 1st graders only stay until 12:00, and then parents can meet them at the school, while the teachers show them how to walk home. It was such a relief to see her radiant face when I went to the school at noon! She said, “I love school! It was so fun!”  And that has continued to be her attitude about it ever since that first day. She is learning Japanese amazingly quickly and is already able to keep up with her classmates, although there are still things she doesn’t understand.

This is how her face looked when I went to pick her up that first day. And following are the pictures of them learning to go home safely. 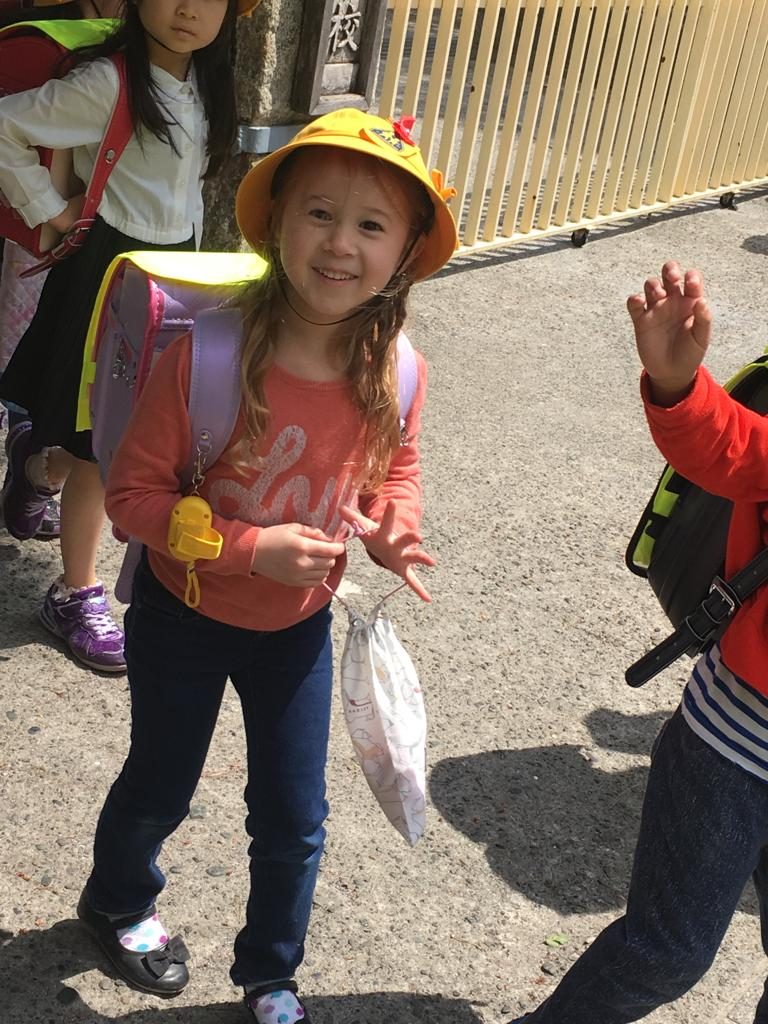 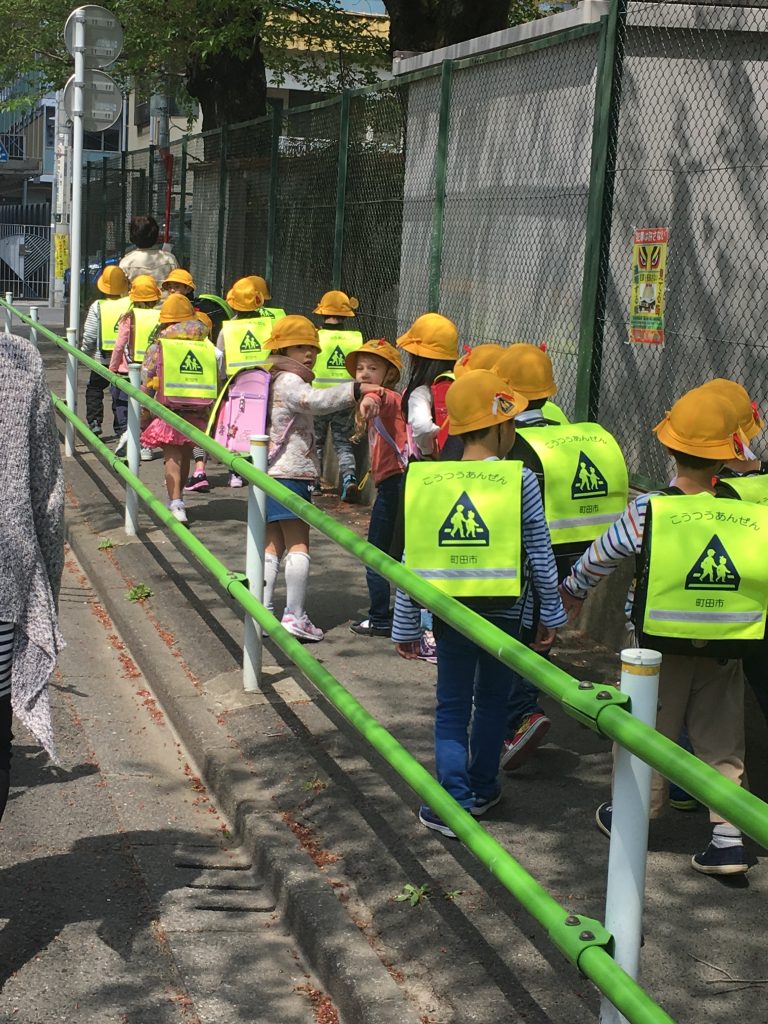 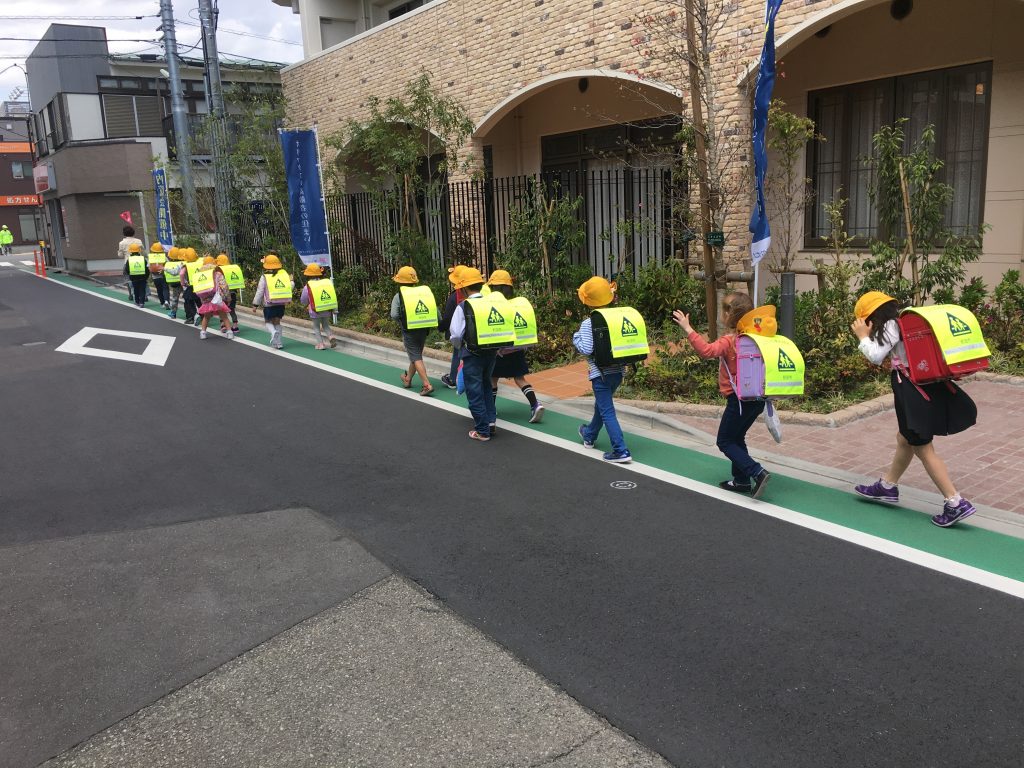 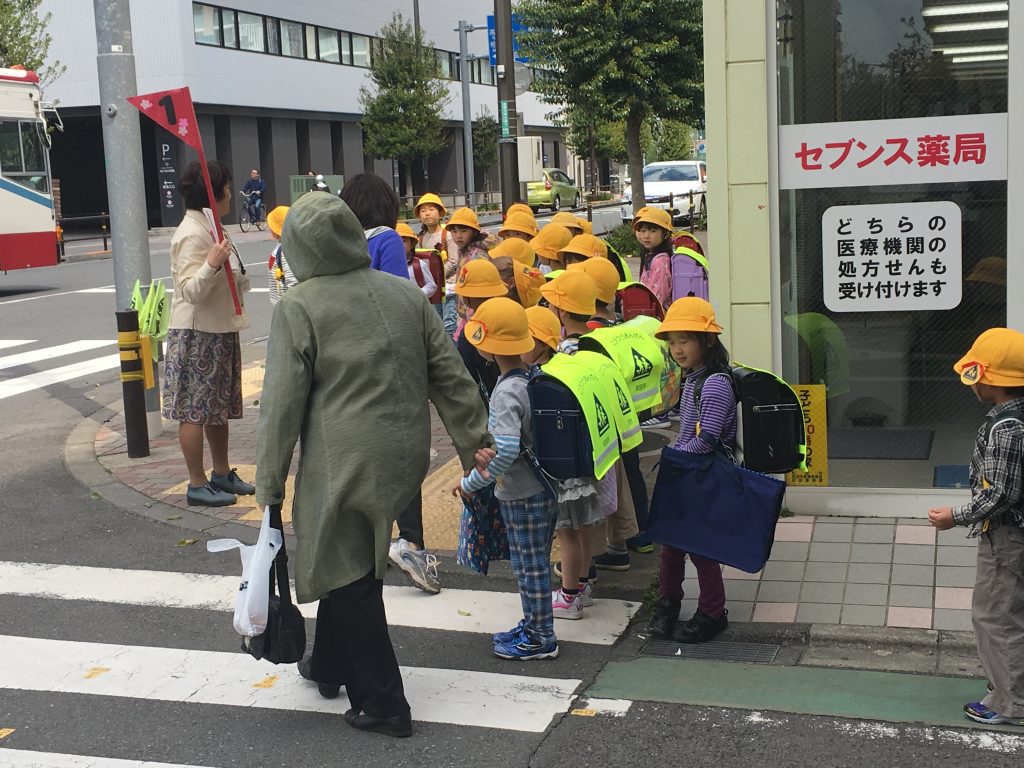 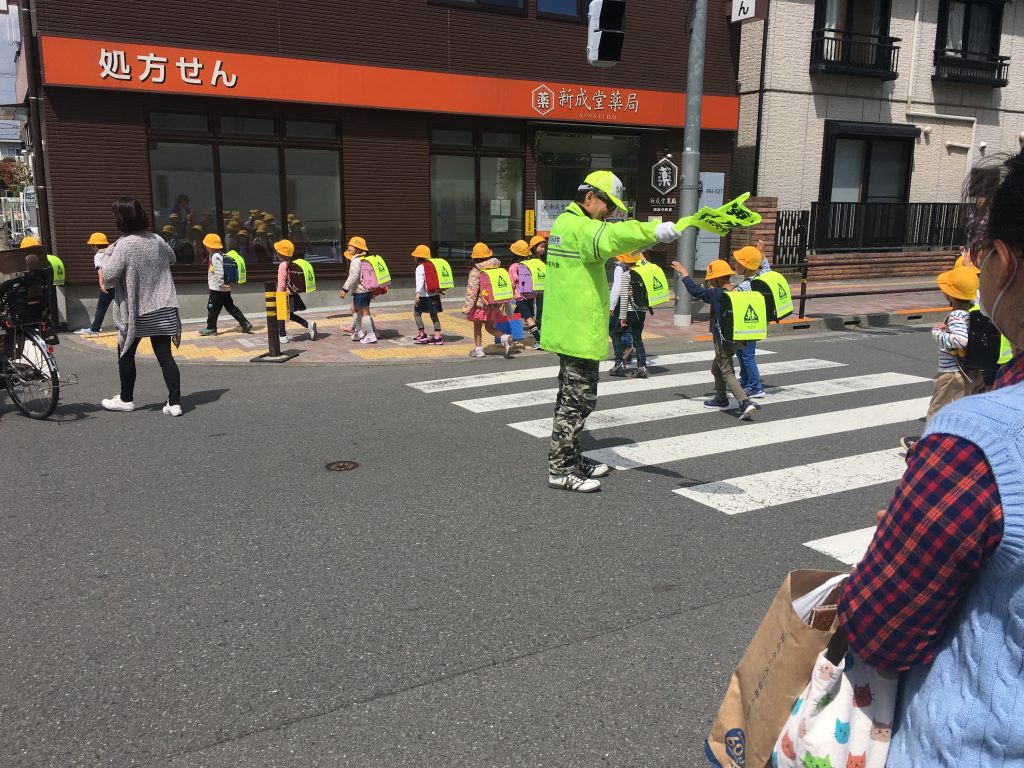 Dominique, starting at such a high grade level in comparison with Olivia, has had a much more difficult time trying to keep up with her class, but that is okay. She is actually enjoying school! And her Japanese language skills have also increased greatly as she has been immersed every single day.

Recently she was asked by a homeschooled friend if she actually LIKED school? And she answered that, yes, she did, and the main reason she gave was that every day was all laid out for you and you knew exactly what to expect, and you didn’t get bored. Just as I thought – they really needed that structure for this season.

And Olivia… she has needed a lot of structure all the time! She has been a… ummm… challenging child, and she has enjoyed the challenge of school. I think a lot of children may suffer from the comparison of not being ‘as good’ as other children at things, but for her this has been a huge motivating factor. She doesn’t want to ‘lose’, so she tries really hard! For example, in the beginning of the 1st grade school year, they learn hiragana, the first of the Japanese alphabets, which has 48 letters. However, most of the children already know it before they begin first grade, so it is just review. For Olivia, it was brand new. Each day she received a sheet of letter practice to do at home. After about three days, she told me that she didn’t want to do it anymore! When I asked why, she said it was because no matter how hard she tried, she never got the golden sticker from her teacher! On the contrary, the teacher would write over each letter with her red pen, showing where the shape was wrong, or where it was supposed to be positioned differently in the little box. But because she desperately wanted that golden sticker, she tried harder! She would erase and rewrite the letters on her homework sheet over and over sometimes, until she was satisfied with it. And many times, she did get her longed-for reward: the golden sticker. 🙂

As a homeschool mom observing all this, I realized that I had been, perhaps, too relaxed in some areas. I guess that, because I feared discouraging the child, I would not require perfect neatness at her age, for example. I guess I figured that they would get better little by little. Now, I would often say, “you should try harder to be neat”, or something like that, but I rarely would make them erase and start over, unless I detected that it was an attitude problem and they were just being sloppy on purpose. Anyway, I realized that they could be capable of more, at least in many cases.

I also found out that Olivia got one of the strictest teachers in the school, and I am so thankful. Smile. God knew what she needed! She is strict, but also very kind, and has a lot of experience under her belt. Olivia loves her.