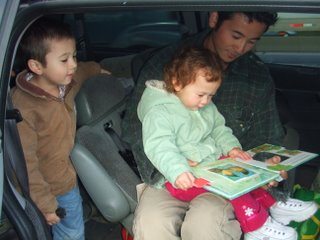 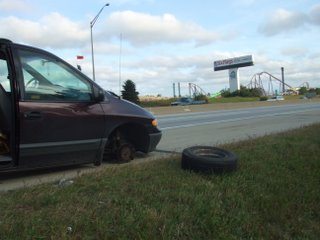 Our trip home was FAR more exciting than we had hoped for. Heading south on 94, the car started to tremble and Fabio got in the right lane. Just across from Six Flags Great America, the wheel grew wings and flew away!! He quickly pulled to the shoulder and screeched to a stop on a bare disc, as you can see in the picture. I had been rather comfortable in the backseat, trying to recover from a tiring weekend, but… that jarred me from my little comfy nest rather abruptly!

We started making phone calls to try to figure out what we were going to do. We called my brother, his mechanic, some friends, and the secretary at our church so she could get online and find a tow place close to where we were. Then we called 3 different places, but being after 4pm, there was no place that would be able to fix it that day, and it would be nearly $400 to tow it home! Then Fabio called Chupis, a Mexican friend who has a trailer and a truck, and he said he would come right away. We were relieve and thankful, and also knew it would be *at least* two hours, so we settled in and tried to figure out how to keep a couple of crabby children happy until our help arrived. They were already tired from the weekend, so it was a bit more difficult task than it might have been on a typical day. First we hung out in the van, reading books and such. Then, we decided to go outside and play for a while. I was SO thankful I had brought their winter coats because it was cold! Here they are, entertaining themselves watching the people on the roller coasters and we also played some games with some pieces of rope we found on the side of the road. I, of course, had to pee, which was a real problem! Luckily, there was a row of trees behind where this pic was taken, but I soon realized there was a fence RIGHT behind the trees, so in order to be covered, I had to wedge myself inbetween the fence and the pine trees! I was laughing hilariously the whole time! 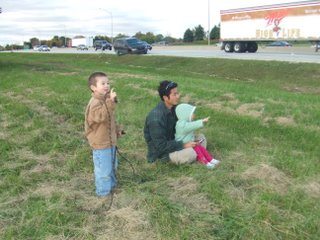 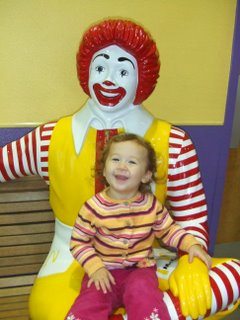 After about 45 minutes out there, a benevolent couple stopped and asked if we needed help. I told them help was on the way and we just had to kill a couple of hours until it arrived.
Anyway, we ended up piling in the back of their BMW and they took us to a nearby McDonalds with a really nice playland! What an awesome blessing! We ended up spending about two hours there and the kids had a wonderful time playing, while Fabio and I got to rest a bit and not freeze!
Here is Dominique with her new friend, Ronald. 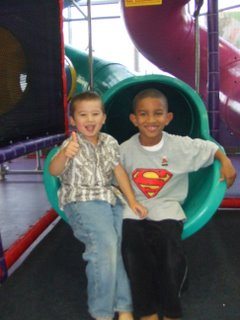 Here is Joshua with his new friend, Joseph.

Finally around 7pm, Chupis arrived. YEAH!! He had come in his utility truck, pulling behind him his trailer. Then, he had put his 4 door sport truck on the trailer, so that I could drive that home with the kids in it. So, after a little while of unloading the little truck and filling the gas tank, we were on our way. ………. BUT, just as soon as we pulled out of the McDonald’s parking lot, the transmission went out on his little truck!!! This was really odd, because he bought it new last year and it only had 40,000 miles on it!
Soooooo, we had to load it BACK onto the trailer and we were back to square one trying to figure out what to do with our van! We considered the possibilities of a hotel for the night, or a rental car home, but all the rental car places were closed and Fabio had to work in the morning. Finally we decided to have the van towed to a local garage to be fixed, and all pile in the cab of Chupis’ truck for the ride home. 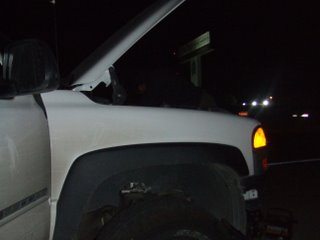 We headed back out to the interstate then to wait for the tow truck by our van and were VERY thankful that it had not been towed already. So, the tow truck came and got our van and finally we were on our way home! Or were we???
When Chupis tried to start his big truck, he realized the battery was dead! Impossible! It had only had the flashers on! UGH! Now where would we get a jump from? Well, the guys had the brilliant idea of taking the battery off the little truck on the trailer to use it for a jump. I dont know what kind of trouble they had with that, but it took FOREVER to get it started! The kids really were troopers through the ordeal, but by then they had about had enough, and I had about exhausted all the finger rhymes and games I could think of. It did give Dominique a chance to learn to sing “Jesus Loves Me” in sign language, though! 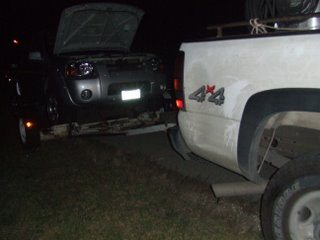 Here is the back of the utility truck and the front of the sport truck while they were trying to get the battery going. 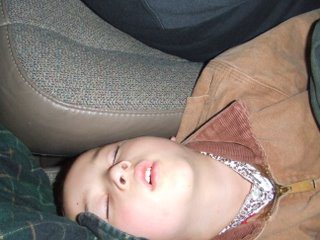 Finally we got on the road and Joshua was asleep immediately. 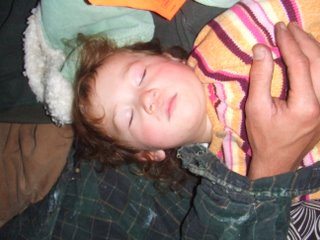 It took Dominique MUCH longer, and she cried a long time before she finally fell asleep. Then, after sleeping a while, something woke her up and she proceded to cry the rest of the way home! 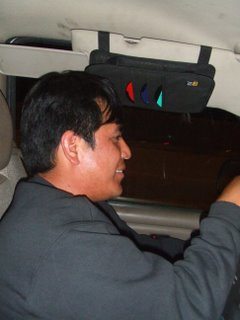 Here is our rescue hero of the night, Chupis.
We ended up getting home about 10:30 or 11:00, I think. Chupis had to work all night after that, and then when he got off, he picked Fabio up at 6am for work!

Another friend, Jeff, is about to pick Fabio up here as soon as his foreman brings him home from work, to take him back up there to get the van.

I got to have a nap this afternoon, and even though I felt like I could sleep until tomorrow, it was really nice to rest for a little while anyway. 🙂

Well, there is nothing like a little adventure, right? And in the middle of all that went wrong, it could have been much worse. We have much to be thankful for, as the Lord protected us and provided all along the way. He reminds us how much we must depend on HIM ~ that we truly can do nothing on our own. We realize in situations like this how utterly helpless we are without Him, and we are thankful for the reminder.

It has taken me nearly all day to finish these posts, and now Fabio is almost home with our van! Praise the Lord!