Jesus Paid It All!

Well, as you can imagine, my hospital fiasco after Olivia’s birth incurred quite the bill. We do not have any kind of insurance, so we were encouraged to apply for Medicaid to cover the cost. We went through all of the red tape and jumped through all their hoops, waited, called, waited some more and called again.

During this wait, the bills kept coming in from all over and I kept calling each month to let them know we were in application and our case was still pending. After what seemed like forever of this hanging over our head, we finally got a letter from Medicaid. I opened it anxiously, just sure that we would have been eligible. We weren’t. We were denied. In the state of Indiana, if you have a family of seven, you have to earn less than $580 per MONTH to qualify. The weight of this news threatened to drag both Fabio and I down low. We had never incurred this kind of debt before, and it was such a helpless feeling. There was just NO WAY we would be able to scrimp enough to cover this kind of bill. Ever. It felt like we would just be paying ten bucks a month, for the rest of our lives.

We called the hospital with the news, and they said we may qualify for some assistance from the hospital’s charity fund. We applied and the next waiting period began. Our expectations were pretty low this time. They said it would be about 30 days.

About 30 days later, the bills came in for the next month’s round, and this time they were all marked “Delinquent”. I could literally feel the weight of this burden dragging my shoulders down! I was about to call all the places to say, “We are still waiting to hear from the hospital”, but since it had been 30 days, I decided to call the hospital first to see if any decision had been reached that I could inform the other places about.

I was more stressed about the situation than ever when I made the call, but I was connected with the sweetest lady! Up to this point, of all the people I had talked to on the phone each month, none had been really kind. Most had been just professional, and some on the rude side, but no one had been truly nice, until this lady. She sounded like an older black lady, and she helped so much to calm my spirit. She informed me that they still needed a copy of my denial letter from medicaid, which no one had told me 30 days earlier! I didn’t even know if I had kept it after that, which I told the lady on the phone. She said, “Oh no, don’t ever throw anything away. Just calm down and look for it.” I rummaged through my papers, and found it! “I knew you’d find it, honey, you just needed to calm down,” was her reply. After I promised to get it to her, I thanked her for being so kind, and for the calming effect she was having on me. She said, “Everything is going to be okay and getting all flustered won’t help anything. It’s not gonna help you and it’s not what the Lord wants for you either.” After that last comment, I burst out, “I knew it! We are sisters in the Lord!” And she said joyfully, “Yes we are, honey! You just need to be still and know that He is God. The mourning may last for the night, but joy comes in the morning!” I hung up the phone and sat there and had a good cry, for the Lord’s GOODNESS that He had shown me by putting me in contact with this lady, His servant. 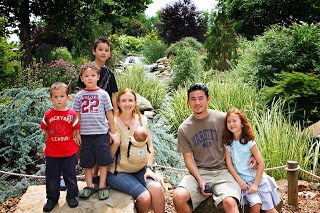 Well, the next day, I called the hospital again to check on our status. I spoke with a different lady and she said, “It shows you were sent a letter a couple days ago that you should receive soon, but our records state that you were eligible for 100% assistance. You have a zero balance.” Really?!? Could it be true? I called Fabio right away and we rejoiced together. He suggested we go out and celebrate that night, but we already had plans, and we did the following evening as well. {more about that in a minute}

One thing that kept resounding in our hearts following this was the debt that Jesus paid for us! We all had a debt that we had NO WAY to pay, and a weight of sin that dragged us down and discouraged our best efforts at enjoying life. And then, Jesus stepped in and took it away! Forgiven! Oh the glory!

Okay, now, just for the fun of it, I just have to share about our celebration too! Saturday we were running errands in the morning, and were near a Great Steak and Potato Company, so we decide to “celebrate” by getting lunch there. I thought I remembered Fabio taking the two older kids there, getting a stuffed baked potato to share, all eating until they were stuffed and still bringing some home, so I ordered three potatoes for us to all share. Well, maybe that had been at a different place, because the potatoes that we got were all very average-sized. We were all still hungry after lunch! On the way home, Fabio said, “Wow. What a celebration – we each got half a baked potato!” And we laughed about it together, and decided that maybe we could do a better job “celebrating” later on. After we got home and the kids had their naps, we lost power in a bad storm. We needed groceries and Fabio needed to get a suit altered, so we all went out again. We got all they way to the suit place, and realized we had forgotten the suit! Another strike!

Then we were thinking about where to really celebrate. That was when Fabio suggested that instead of spending money at a restaurant, we spend it at the grocery store, splurging on some special things we wouldn’t normally get. (Maybe he’s actually the one who’s Scotch? hehe) So, we headed to the grocery store and took forever to get groceries. By the time we were on our way home, it was after 8:30 and I was thinking, “Yay. Now I get to go home and cook up our ‘celebration’!” But when we got home, we STILL had no power. It was after 9pm and we were all tired, so we decided to have cold cereal for supper. As we sat in the dark with a child’s flashlight stuck in a shoe as our only light, eating cold cereal together, Fabio said, “Boy do we know how to PARTY!” And we laughed so hard we cried! We might not have had the most extravagant celebration in the world, but we did have a lot of fun laughing about it! And probably made a lot better memories that way too. 🙂

(These pics are not from that night – it was too dark! But we probably looked this silly!) 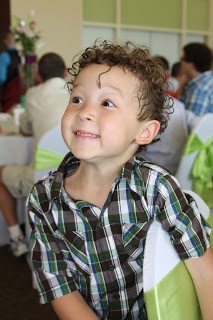 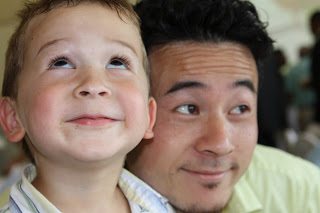 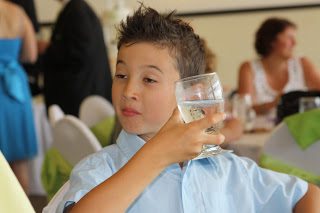 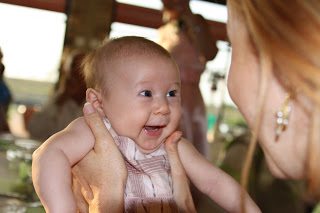 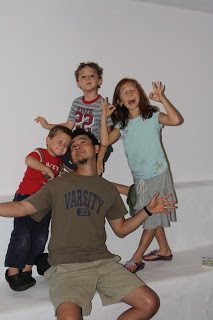