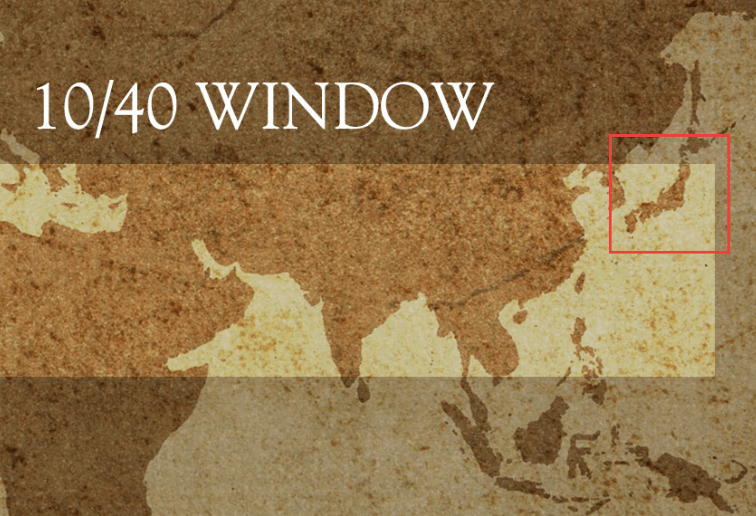 The 10/40 Window is home to some of the largest unreached people groups in the world.

The 10/40 Window has several important considerations: first, the historical and Biblical significance; second, the least evangelized countries; third, the unreached people groups and cities; fourth, the dominance of three religious blocs; fifth, the preponderance of the poor; sixth, the strongholds of Satan within the 10/40 Window.

The 10/40 Window: The Least Evangelized Countries

The 10/40 Window is home to the majority of the world’s unevangelized countries. The “unevangelized” are people who have a minimal knowledge of the gospel but have no valid opportunity to respond to it. While it constitutes only one-third of earth’s total land area, nearly two-thirds of the world’s people reside in the 10/40 Window. The original 10/40 Window included only countries with at least 50% of their land mass within 10 and 40 degrees north latitude. The revised 10/40 Window removes several Christianized countries such as South Korea and the Philippines and includes several additional countries, such as Indonesia, that are close to 10 or 40 degrees north latitude and have high concentrations of unreached peoples. See the original and revised country lists. These lists include both sovereign states and non-sovereign dependencies.

The 10/40 Window: The Unreached Peoples and Cities

The 10/40 Window: Poverty and Spiritual Oppression

The 10/40 Window is home to the majority of the world’s poor. Of the poorest of the poor, more than eight out of ten live in the 10/40 Window. Still, the billions of people who live in the 10/40 Window have suffered not only the ravages of poverty and disease, they have also been kept from the transforming power of the Gospel. They are poignant examples of the truth expressed in 2 Corinthians 4:4, which states that “the god of this age has blinded the minds of unbelievers, so that they cannot see the light of the gospel of the glory of Christ, who is the image of God.”

Japan’s religion and the ‘land of Samurai’

Religion:
Shintoism, the native religion of Japan, is rooted in animism and is polytheistic.  In the sixth century, Buddhism was added to Japanese culture, and today most Japanese claim both sets of beliefs.  These traditions, combined with those of Confucianism and Taoism, contribute to the most widely accepted religious principles in Japan:  ancestor worship; religious practices centered on the use of prayer meditation; amulets and purification; close ties between religion, family, and nation; and a free exchange of ideas among religious systems.

Challenges:
Japan’s suicide rate is one of the highest of all industrialized nations, topping over 30,000 every year since 1998.  Japan’s ancient Samurai culture and Buddhist traditions make this practice an acceptable and even honorable way to alleviate shame that may have been brought to the family.  When a cabinet minister hung himself hours before facing a bribery probe, Tokyo’s governor praised the action, calling the dead man a real samurai.

Japan has a history of “honorable suicide.”  Samurai warriors would often kill themselves to avoid shame.  In World War II, young men – kamikaze – would deliberately fly bomb-laden planes into Allied ships.  Buddhist tradition does not encourage suicide, nor does it condemn the act – in effect making it religiously acceptable.

Jeremy Sink, a missionary in Japan points out that Japan is a ‘hard-to-reach’ people group, but it is one of the few that welcomes Christian workers:

1.  Japan is of Strategic Importance – It’s a first-world country with worldwide influence.
2.  Christian Missions is “Legal” in Japan – unlike many of the Muslim nations within the 10-40 window, Japan welcomes Christian missionaries.  This isn’t meant to be construed as an argument against sending missionaries to dangerous countries where they face imprisonment or death.  However, given the fact that Japan is a nation of 127 million people and less than 0.5 percent of those are Christian, it seems obvious that the Church would be sending many missionaries through the open door that exists there!  FYI – the Japanese people are one of the largest, single unreached people groups on planet earth.
3.  Japan is Ripe for the Gospel – Currently, the Japanese economy is in the midst of a recession that has lasted nearly 20 years.  Japan has one of the highest suicide rates of all the industrialized nations of the world.  Depression and disillusionment are at an all-time high.  Old idols are failing to deliver on their promises to bless and protect worshipers.  This is an excruciatingly hard place for a people to be, and we don’t rejoice in their hardship.  At the same time, the country’s troubles also put the people in an unusually good position to hear the hope of the Gospel and receive the love of God through the person of Jesus Christ.

So why Japan? Well…Why not Japan?