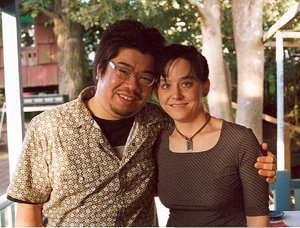 Pictured here are our dear friends Hideshi and Penny Nakanishi. We became friends while attending the same church in Moriyama, Shiga, Japan.

Hideshi was a very talented musician who used his giftings for the Lord, leading worship at Moriyama Church, as well as recording and performing several albums of Christian contemporary music that he composed. (If you click on the link, you can listen to some of his music.)
His wife, Penny , is from Australia and she and I became good friends. (The link tells is to an interview that tells a little more about how she ended up in Japan.)

I got a shocking email from Penny on December 28, 2005, that they had taken Hideshi to the doctor to have him checked out for a persistent cough that he had had a couple of months and wouldn’t go away. After extensive testing, it was discovered that he had stomach cancer that had spread to his lungs. They let him go home with oxygen and anti-cancer medication, because his condition was too serious for him to undergo more aggressive chemo therapy.

We all prayed for him continually.

Last Wednesday, I received an email from Penny stating that his condition had deteriorated drastically and that he had been hospitalized. We continued to pray fervently.

Friday night, one more email came, this time stating that Hideshi had been received into the arms of his Savior on Saturday morning at 1:05am Japan time. He was 38 years old. Please pray for his young widow and his unsaved family members. It is a sad time, and yet we are comforted to know that Hideshi is rejoicing now in his eternal home.

“So when this corruptible has put on incorruption, and this mortal has put on immortality, then shall be brought to pass the saying that is written: “Death is swallowed up in victory. O Death, where is your sting?O Hades, where is your victory?”
The sting of death is sin, and the strength of sin is the law. But thanks be to God, who gives us the victory through our Lord Jesus Christ. Therefore, my beloved brethren, be steadfast, immovable, always abounding in the work of the Lord, knowing that your labor is not in vain in the Lord.” 1 Corinthians 15:56-58