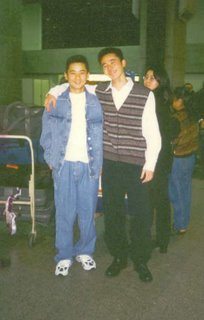 Well, we are currently out of a camera, and probably will be for a while, so I pulled this picture out of the archive. 🙂 It is Fabio and his little brother Fernando, and big sister Luciana looking over Fabio’s shoulder. This was a life changing day for all of them. It was the day that they moved to Japan, in July of 1996. Fabio was so against the move, that he spent that day with friends instead of packing, and then threw some of his personal things into a suitcase an hour before leaving for the Sao Paulo Airport, where this picture was taken. He was 17 years old.
Anyway, it can make you think, ya know? To him at the time, moving to Japan was the worst possible thing that could happen to him! He had a life in Brazil, friends, a job, lots of fun. In Japan he had nothing, and couldn’t even speak the language! The only thing that awaited him was 12 hour days of hard work in a dark factory. Not too exciting.
However, the Lord always has our best interest in mind! The Lord used the move to remove Fabio from the not-so-holy lifestyle he was leading in Brazil, and take him to Japan where he would eventually meet his Savior!! And as if that wasn’t good enough, he also got a wife out of the Japan deal! 🙂
Anyway, just thinking tonight about how God is ALWAYS good, and *everything* he does is good, even if we don’t always understand at the time.
PS… tech support please ~~ how come sometimes I can upload a pic that I scanned, and sometimes I cant???