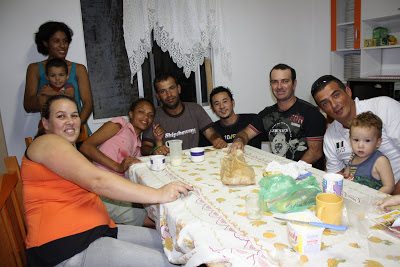 Yesterday we were tired. There had been event after event at the church, so Pastor Facundo told us to just close the doors of the church to rest and get renewed. (The church strives to keep the doors open from 8am~6pm in order to be available to any who come in for prayer, help, etc.) So we closed the doors. Paula, who lives downstairs was trying to catch up her laundry, and I was upstairs trying to get our bags ready. After lunch, Fabio was studying when all of a sudden, he decided to stop in the middle of what he was doing to go take out the trash.

Just before he decided to do that, a couple named Michael and Patricia had been walking down the street, until they could go no further, and then they sat down on the sidewalk. Patricia laid her head on Michael’s shoulder and started to cry.

That was when Fabio came out with the trash. He asked them what was wrong, and they answered, “Crack”. Turns out, they had been off crack and doing well, working and trying hard, but on their own strength – without having met the ONE who can really set them free! So, as usually is the case, when a few things started to go wrong, they got discouraged and went back to drugs. Six days earlier. They had stayed high pretty much all that time, without sleeping for five days straight. Now, they had finally come down, crashed down to planet earth and the reality that in just six short days they had lost everything. Everything. Now they were back out on their backsides with nothing. Nothing at all in the world, and no one that cared.

Or so they thought. Just as they sat down on the curb to cry about it, they found out they were wrong. They didn’t even know that they had stopped in front of a church! They had already gone to a church looking for help, earlier that day — and had been turned away.

Fabio asked if they were hungry, and they were. So, we brought them in and Paula warmed lunch up for them. They were so broken. We have come to recognize the move of God in a person’s heart. Either the Lord is touching them, and they are receiving, or else they are too proud and hardened to think they need help. The difference, even just looking at one’s face, is drastic and obvious. This couple was broken, being touched by the power of God. We let them take showers, and provided a mattress for them to sleep on while I washed their clothes and bag of sheets and things they had with them.

After they woke up four hours or so later, we had afternoon coffee and Fabio and Claudio began to minister the Word of God to them. They cried and cried, and prayed to receive Christ as their Savior and Lord. It was a powerful time!

In this picture is : Paula (who lives downstairs), Tabatha and Jonathan in the back, Patricia and Michael in the Shipshewana shirt (no he hasnt been to Shipshewana – he was wearing Fabio’s shirt.), Claudio (Paula’s husband who also lives downstairs!), Vamilson and Johann