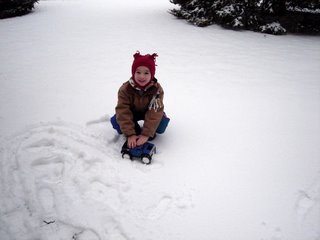 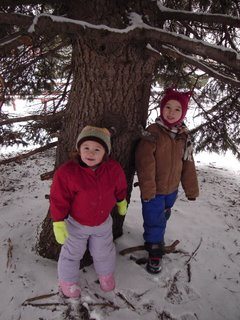 Woo Hoo! We finally got some snow to play in! The kids were excited to be over their colds and be able to go outside and play ~ and it made an *amazing* difference in their attitudes too! A little fresh air and activity, some change of scenery and some exercise did them a world of good.

I had Israel in the sling, inside my coat. He was snug as a bug in a rug and I dont think he even knew he was outside! It was a little tough to make snow angels that way though! LOL, I didn’t try. 🙂 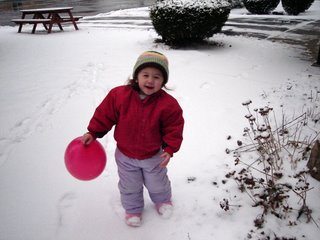 Last year, Dominique could not walk in her snow boots, nor move in her snow pants, nor use her hands in her mittens, and therefore was not thrilled about playing outside in the freezing snow. 😉 Can’t blame her, right? She is having a lot more fun this year, although she still doesn’t like keeping her gloves on. Next year, Israel will probably be the one not thrilled about it… 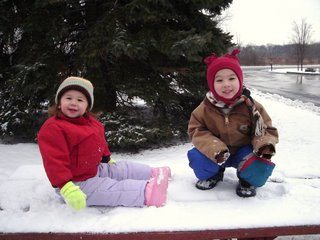 On top of the picnic table. They found some play shovels and managed to remove the snow off the sidewalk all by themselves! The following day, they did the same for the back patio. What a great way to wear them out while they have fun and we get some work done! 🙂 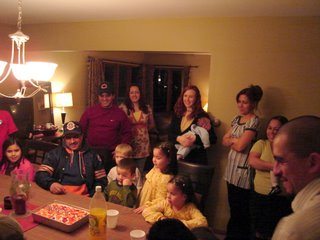 And lastly, a final pic from Fabio’s party where you can see some of the kids. I can upload five at a time, so I figured, why not?

I was going to take some pics yesterday, but I forgot the camera! We went downtown Chicago to register for Israel’s birth certificate. It was….. fun. (?) Working with government offices is not typically my idea of fun, but everything did go smoothly, while not rapidly!, and it wasn’t too terrible cold to walk in the windy city with three little children. Joshua always loves to see the buildings, while Dominique was oblivious, but enjoyed the ride in the stroller. 🙂 We are glad to have that done. Now we can apply for his passports and hopefully get them soon and be off to Brazil! Woo Hoo!